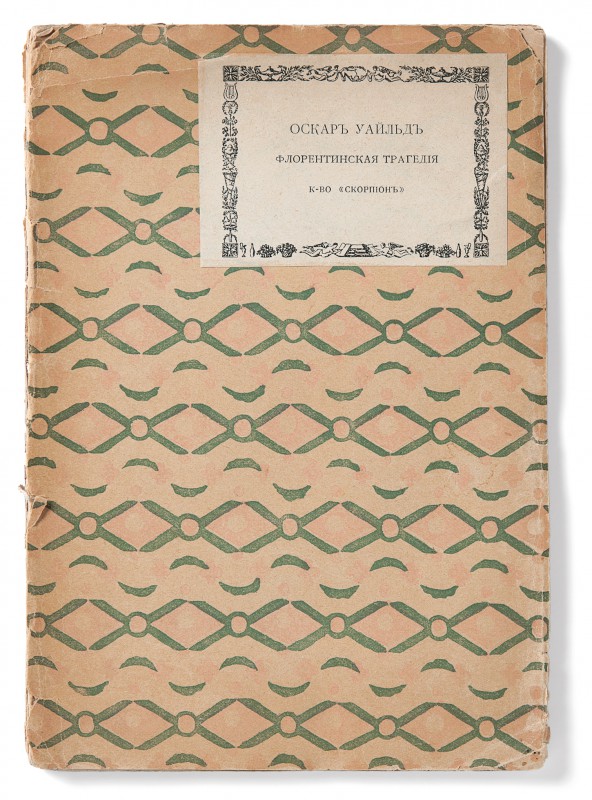 This is a copy of the first separate edition in any language of Oscar Wilde’s unfinished play, A Florentine Tragedy, translated into Russian from a copy of Wilde’s manuscript and published in Moscow by Skorpion in 1907.

Correspondence between the young translator, Mikhail Likiardopulo, secretary of the Russian Symbolist journal Vesy (The Scales), and C. S. Millard (aka ‘Stuart Mason’) began in 1906, the year Millard was convicted of ‘gross indecency’ at Oxford.  In December that year, Millard talked of ‘making a copy of Wilde’s Florentine Tragedy (the manuscript of which was in the care of Wilde’s executor Robert Ross) for his “Russian friend”.  “The Russian edition will be published in a few weeks in a monthly review called “Viessy” and afterwards in book form”, he tells [Walter] Ledger later in the month, “it will be the first publication of the play at all.” 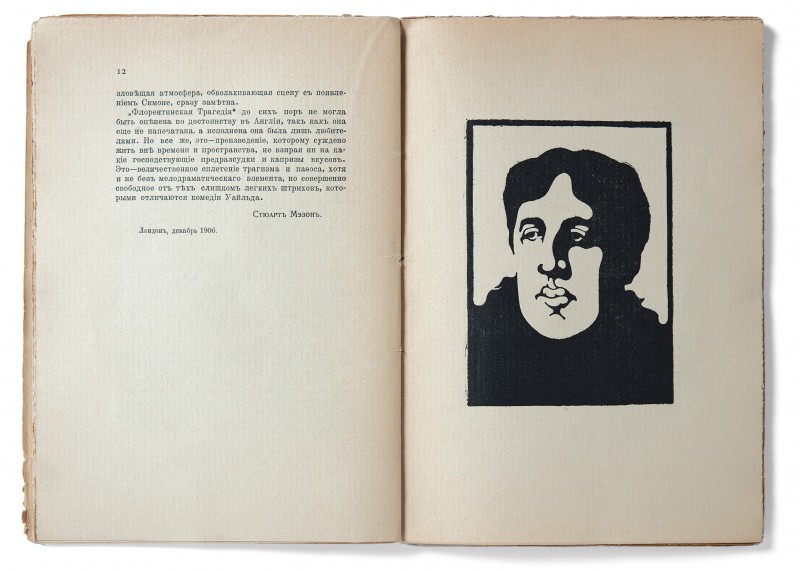 ‘There were advantages for Ross in authorizing first publication of Wilde’s work in Russia.  In 1905 he had been prosecuted by the Board of Trade for allowing a translation into German of The Duchess of Padua.  He wrote to Ledger that he dared not published the play in England for fear of infringing the country’s intricate copyright laws.  Russia was beyond the compass of these laws.  A certain romance was attached to the manuscript of the Florentine Tragedy: it was one of three which had gone missing from Wilde’s house when he was arrested in 1895 and reappeared in a London bookseller’s several years later.  Millard made a typed copy and Ross handed it to Skorpion who promised five pounds for it.  A translation by Likiardopulo and Kursinky duly appeared [in Vesy] in 1907; this was its first publication in any language.  The translation was subsequently published in a separate volume [i.e. this one] with an introduction by Millard, and a letter from Robert Ross, appealing to Wilde’s numerous Russian readers, translators and publishers for co-operation with the estate, despite the lack of a legal convention, in the interests of his orphaned, impoverished sons’ (Rachel Polansky, English Literature and the Russian Aesthetic Renaissance, Cambridge UP, 1998, p. 163).

Mikhail Likiardopulo (1883–1925) went on to act as a foreign correspondent for various Russian newspapers during the First World War, and was subsequently on the staff of The Morning Post in London.  (It has even been suggested that he also worked for the British secret service.)  He died, and is buried, at Brighton.

Posted in
Previous: Banned books Next: For Fauré

2 responses to “Wilde in Russia”