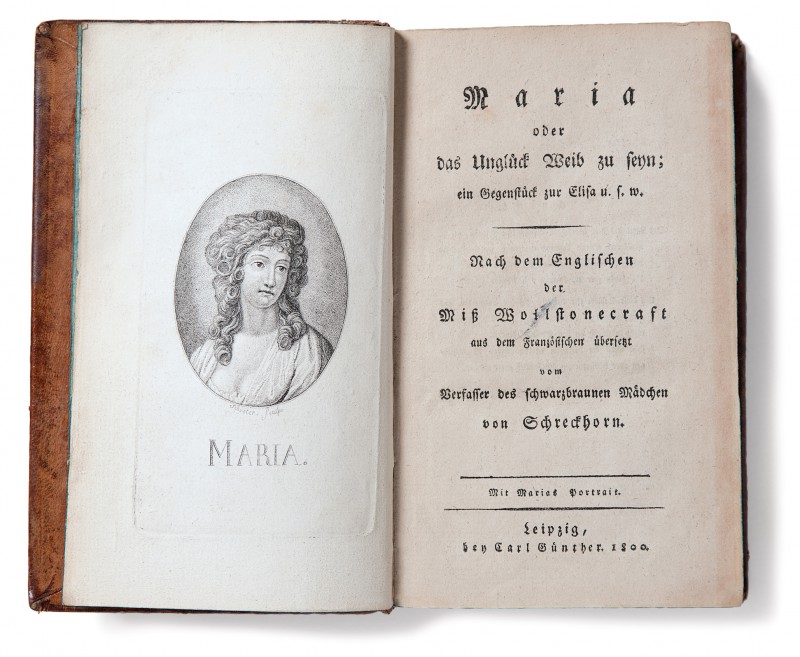 A couple of weeks ago, I wrote about a very rare German novel on the rights of women.  This is another rare German novel, published only the year before, in 1800, a translation of Mary Wollstonecraft’s important proto-feminist novel, The Wrongs of Woman.  This German version is translated via a French edition, Maria, ou Le malheur d’être femme (Paris, 1798), and dedicated to the Leipzig bookseller Ernst Bornschein.

‘Her most radical work’ (Sapiro, p. 266), The Wrongs of Woman, or Maria; a fragment, Wollstonecraft’s gothic novelistic sequel to A Vindication of the Rights of Woman, was published by William Godwin as part of his wife’s Posthumous Works in 1798.  The translator here is unknown, even though the title points to the recently-published Das schwarzbraune Mädchen vom Schreckhorn (Leipzig, 1799).  Better marketing, perhaps, is seen in offering Wollstonecraft’s novel as a counterpart to Wilhelmine Karoline von Wobeser’s Elisa, oder das Weib wie es seyn sollte (1795), one of the most widely-read novels of the late eighteenth century in Germany (and which had incidentally been published in English translation, Elisa or the Pattern of Women, in 1799).

The engraved frontispiece, by Schröter, is reminiscent of John Opie’s portrait of Wollstonecraft, now at the Tate.

Posted in
Previous: 'Probably the strangest private press of all time' Next: The Ring comes to London