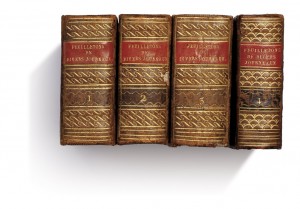 In 1800, the Journal des Débats politiques et littéraires, one of the most important French newspapers, politically and intellectually, of the time (by the end of the Empire, it had 23,000 subscribers), was the first paper to introduce a feuilleton, to provide its readers with non-political news, reviews, criticism and gossip.  It was the brainchild of Julien-Louis Geoffroy (1743–1814; ‘le père du feuilleton’, as Balzac called him), the Journal’s theatre critic from March 1800 until February 1814 (‘His dramatic criticism … was largely responsible for the success of the paper’, Oxford Companion to French Literature), and it soon became a permanent literary feature in the French political press as other papers followed suit.  (And not just in France: German newspapers today still head their culture section ‘Feuilleton’.)

Napoleon had the paper’s name changed from Journal des Débats to Journal de l’Empire in 1805 and six years later confiscated its capital, making it an official organ of the Empire until the end of March 1814, when the old publishers resumed possession.  Geoffroy remained on the staff throughout these changes, producing his theatre reviews every few days, which were always printed at the foot of the page (‘au rez-de-chaussée’), ruled off from the rest of the paper so that readers could cut out the review with ease.

These volumes contain over 750 feuilletons, preserved by a contemporary reader over a four-year period.  The first volume (5 Mar. 1812 – 30 Oct. 1813, with a couple of issues from June 1811 bound in at the beginning) contains theatre and opera reviews, the second and third (1 June 1812 – 11 Oct. 1813, and 12 Oct. 1814 – 6 Feb. 1816) reviews largely headed ‘variétés’, i.e. books, spectacles, fashion, and architecture (the restoration of the Louvre, 1 April 1813, the building of the Pont d’Iéna, etc. 17 May 1813).  Also included is a good run of feuilletons from the Journal général de France (Sep. 1814 – Dec. 1815, some of these only pp. [2]), plus a few from the Aristarque français, Journal de Paris, and Gazette de France.  The fourth volume preserves those feuilletons from the Journal de l’Empire headed ‘beaux arts’ (6 July – 7 Sep. 1812), with series on the palaces around Paris, the salons and their exhibitions etc., and the odd book review.  Then follow more ‘variétés’ and ‘beaux arts’ from June 1812 to October 1813, beginning again with November 1814 (now as the Journal des Débats) until January 1815.  The compiler has had the feuilletons on fine art from the Journal général de France (Nov. 1814 – Feb. 1815, on particular paintings), books (Oct. 1814 – Jan. 1815), and a number from an intriguing series entitled ‘L’anglais à Paris’ written by John Smart (Sep.–Dec. 1814) bound up here, too, along with a few from the Gazette de France (entitled ‘Miroir des mœurs’, 1814–15).  The Journal des Débats starts again with 1 January 1816 (largely theatre reviews), running to March, with a handful from the Journal de Paris included.  The fourth volume also contains a number of feuilletons written in manuscript, perhaps when the owner missed an issue of the paper.

Posted in
Previous: When translators get angry Next: Happy Birthday, Mr Dickens!