I’m always up for a challenge.  This book certainly proved to be one. 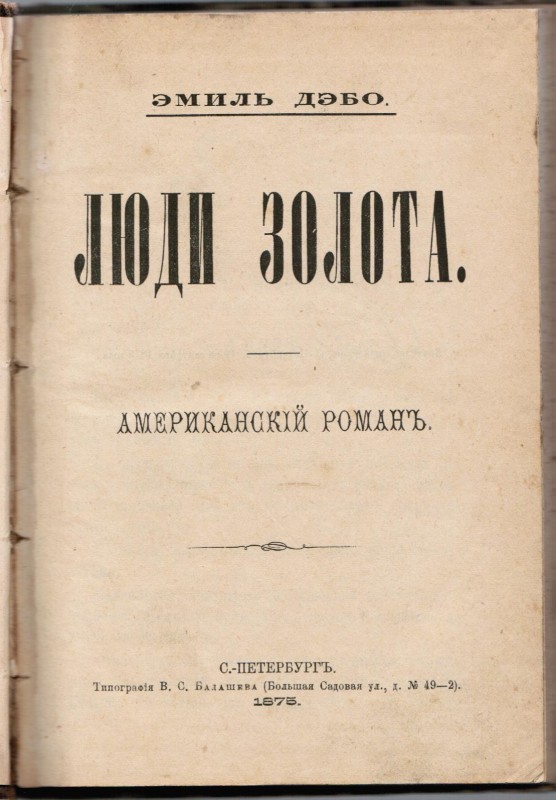 The title reads: Emil Debo, “People of Gold.  An American Novel”.  But just who was Emil Debo?  And what was this book exactly?  The rendering of French in Russian always requires a bit of guesswork, but in the end I managed to track down a French author called Émile Desbeaux (1845–1903), who wrote a number of popular novels and plays.  But nothing called “People of Gold”.  So the next thing was to turn to the text itself: names of characters, places, anything which might give me a lead to the source text.  Finally I got somewhere: Desbeaux’s 1875 novel Le mystère de Westfield, roman américain features as its hero a young Frenchman who seeks refuge on a dark and stormy night only to awake the next morning to find that the shack where he has found shelter to be the scene of a triple murder and a suicide.  Soon clues lead to a secret society called the Golden Men, who have been blamed for various crimes (disappearances, fires, railway accidents) in New York and the states around, and a shady English peer.  I’d found the book!

What is particularly interesting about the novel, which is otherwise just a typical sensational potboiler, is how the narrative occasionally breaks off to remark on nineteenth-century American life: a digression on drinking in America prefaces a scene in a Brooklyn bar, and the final chapter describes The Tombs prison.  I have long been interested in America as seen from Europe, and how particular views over here might have come about.  The fact that Desbeaux’s novel appeared in Russian quite so quickly, only months after the French original, certainly suggests a ready readership.  And it must have been popular literature such as this (a second edition followed in 1879) which helped shape Russia’s perception of America, whether the content itself was well-founded or not.

Posted in
Previous: Reading in the heat Next: Printed for the invasion of Britain