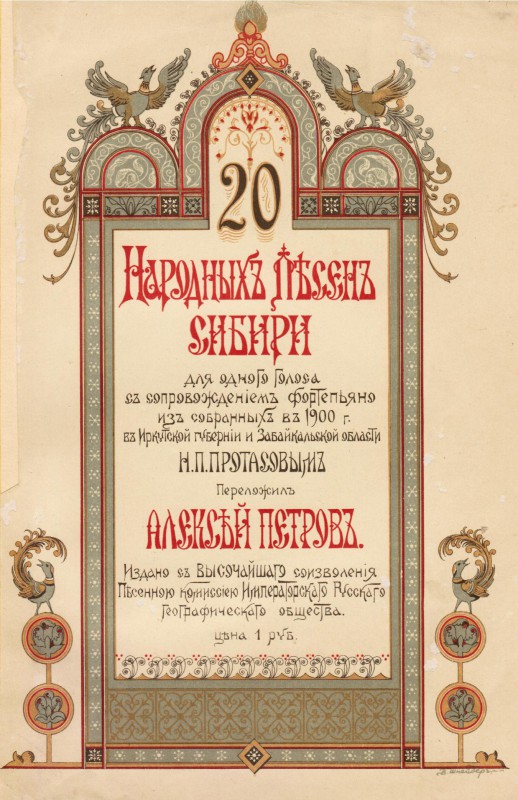 20 Siberian folk-songs for solo voice with piano accompaniment from those collected in 1900 in the province of Irkutsk and the Transbaikal region by Nikolai Protasov …  Published … by the Song Commission of the Imperial Russian Geographical Society (1902).  The stunning chromolithographed cover was designed by V. P. Shneider.

Nikolai Protasov (1865–1903), an active member of the Eastern Siberian section of the Imperial Russian Geographical Society, was the first to go about producing a proper collection of the folk-songs of Siberia.  In 1900–1 he recorded, on a phonograph, almost 150 songs, writing some of them out in notation.  It is twenty of these songs which are published here (a very rare book), although Protasov’s complete collection did not appear in his lifetime, and it has even been suggested that he burned his manuscripts in despair at not being able to see his work in print.

According to the preface, it was thanks to Rimsky-Korsakov that these songs appeared at all.  He gave them to the Commission set up by the Tsar in 1897 to collect Russian folk-songs, which published them as a follow-up to another folk-song collection, by Balakirev, Lyadov and Lyapunov.

Posted in
Previous: Monumental Propaganda Next: Song-collecting in Siberia: II