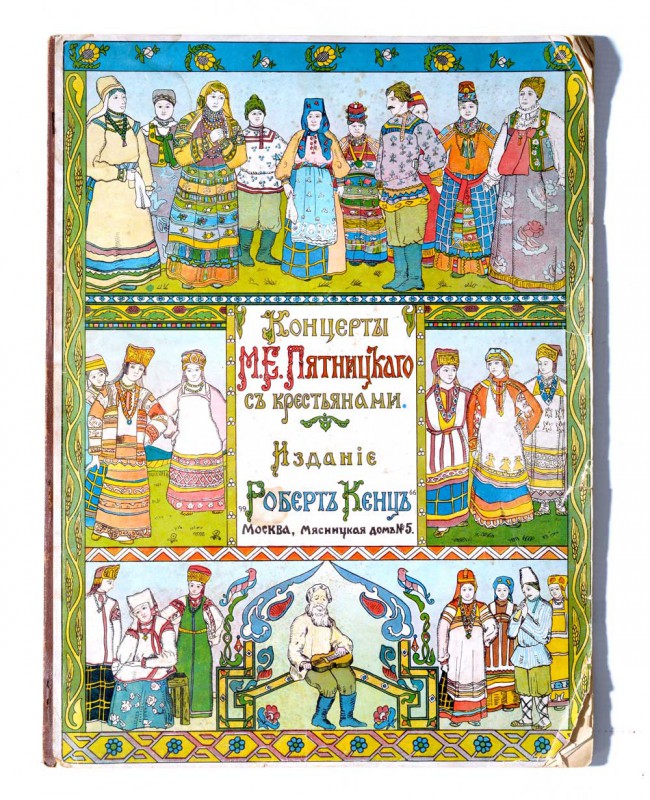 This book came in recently, appealing to my interests in Russia, music, and (as you may have read before) the First World War.  Dating from 1914, it’s a charitable publication: ‘20% from each copy sold will go towards helping the All-Russian Zemstvo Union for Aid to Sick and Wounded Troops’ (founded July 1914), it reads.  The title translates as The Folk Epics and Songs of Great Russia, and it relates to a man called Mitrofan Pyanitsky.

Pyatnitsky (1864–1927) was a famous folk singer and collector of folk songs.  ‘In 1903 he was invited to join a commission on folk music set up by the Society of Friends of Natural Science, Anthropology and Ethnography, attached to Moscow University.  He appeared in folk concerts organized by this commission in Moscow and elsewhere [which] captured the interest of Russian audiences, and Pyatnitsky was encouraged to form an ensemble of singers and instrumentalists to give regular performances of folk music.

‘In 1910 Pyatnitsky founded a larger choir, whose programmes featured not only folksong arrangements but also choral dances, children’s games and dramatized scenes of peasant life.  He made more than 400 cylinder recordings of folksongs from the Voronezh area, and also formed an invaluable collection of folk instruments and peasant costumes.  After the 1917 Revolution Pyatnitsky’s folk choir was given state support, and similar choirs were set up through the Soviet Union …  His choir continued to exist after his death; in 1940 it was renamed in his memory Russkiy Narodnïy Khor imeni Pyatnitskogo’ (New Grove).

The present work was published by Robert Kenz in Moscow, to coincide with various fundraising concerts put on by Pyanitsky there.  The book contains an article by Vyacheslav Paskhalov on Pyanitsky’s work on the musical construction of songs from Voronezh, before printing 20 of the songs themselves, with musical notation.  The next sections reprint various newspaper reviews of Pyanitsky’s concerts (pp. [11]–30) and the programmes for ten concerts, 1911–14.

Posted in
Previous: A double-take book Next: Under the influence