In the century before cinema and television changed our lives forever, there were other ways of creating moving pictures.  One such inventive Victorian method was the zoetrope (from the Greek zoe, ‘life’, and tropos, ‘turning’), ‘a mechanical toy or optical instrument consisting of a cylinder open at the top, with a series of slits in the circumference, and a series of figures representing successive positions of a moving object arranged along the inner surface, which when viewed through the slits while the cylinder is in rapid rotation produce the impression of actual movement of the object’ (OED).  You can watch a modern version of one here.

I’m sure many early zoetrope owners made their own image strips for inserting into the cylinder, but you could also buy them: 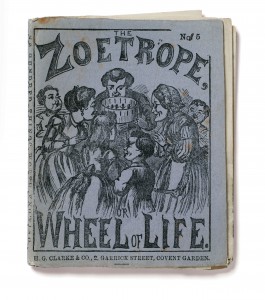 This little ‘book’ was, of course, never supposed to survive.  You were meant to take it apart, cut it up, and use it.  But the printed wrapper offers us quite a lot of information about the early days of the zoetrope, and the role of H. G. Clarke in popularising it: ‘Messrs. H. G. Clarke & Co., 2, Garrick Street, Covent Garden, were the first to introduce the Zoetrope to the English public, having published this amusing Toy in the early part of July, 1867, several months before its importation from America.  Several other sheets of humourous [sic] figures for inserting in the Zoetrope are now ready.’

As one might expect, such published sheets of zoetrope inserts, still in their original wrappers, are very rare.  This one, produced about 1870 or so, features in my latest printed catalogue, Short List 6, copies of which will be ready shortly.

Posted in
Previous: Fair warning Next: ‘The first unwritten book’