June 1914 saw the publication of James Joyce’s Dubliners.  Thirteen years later, in 1927, and it became the book of Joyce’s to appear in Russia, with a wonderful cover design by 22-year-old Georgy Fitingof: 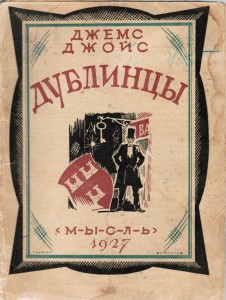 The translator was Elena Nechaeva (1885–1966), a former librarian and the wife of the intellectual writer, Georgy Fedotov, who had emigrated to France in 1925.  Nechaeva followed him a year or so later (after the death of her mother), and they became active in the Parisian émigré community.

Joyce had come to the attention of Russian readers two years before, when selections from Ulysses (from Episodes 1, 7, 12, 17, and 18) appeared in a short-lived almanac called ‘New Books from the West’, translated by V. Zhitomirsky: 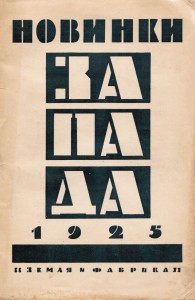 A complete Russian translation did not appear until 1989, published in book form in 1993.

Posted in
Previous: Dracula Next: The book as weapon