1776 is famous as the year that America declared its independence (celebrated tomorrow, of course), but what else happened that year?  Here’s something: Catherine the Great’s son got married. 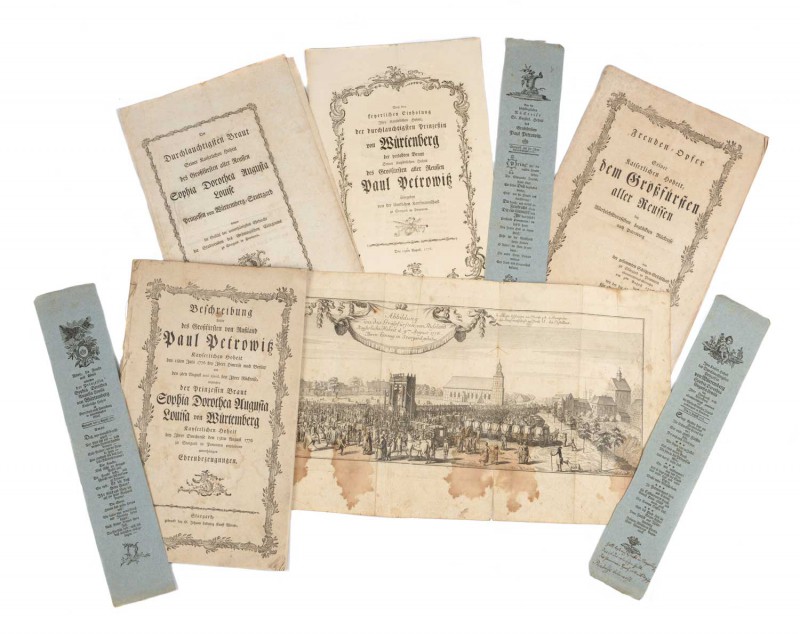 This collection came in recently.  Printed at present-day Stargard Szczeciński (Poland), it’s an account of the celebrations given in the town to welcome Catherine’s son, Paul, in the summer of 1776 on his way to and from Berlin to collect his intended. 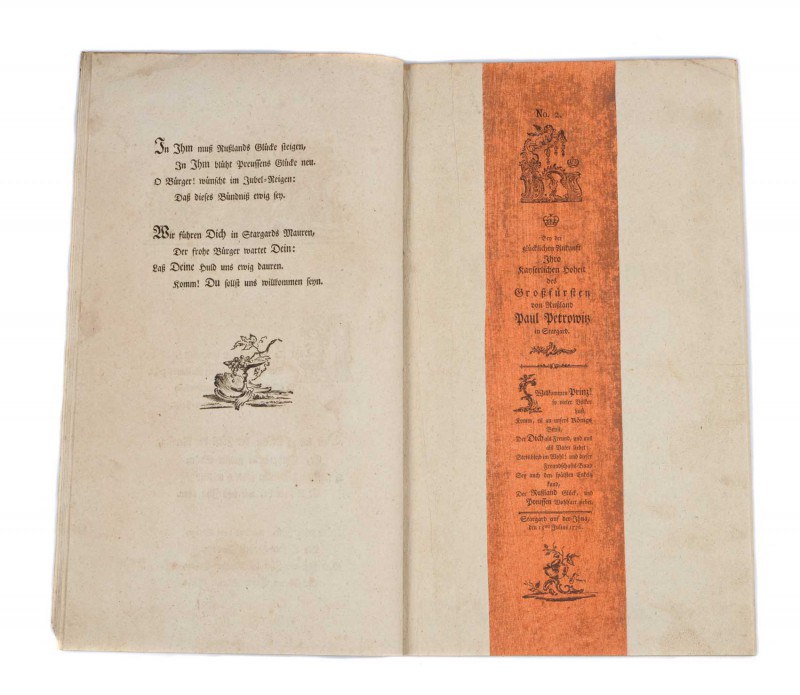 No time was wasted in finding a second wife for Paul after his first, Natalia Alexeevna, died shortly after giving birth to a stillborn son, in April 1776.  A match was found in Sophia Dorothea of Württemberg, who was only 17 when she was introduced to Paul (he was 21).  ‘It was decided that Paul should go to Berlin to meet his intended.  The trip turned out to be a triumphal progress.  Every town in the Prussian kingdom through which Paul and Prince Henry [of Prussia] passed organized a celebration of greeting which emphasized over and over again how important Paul was, and how much he and his royal host were loved.  Local celebrities drawn up in ranks and splendid in their special dress or uniforms joined soldiers, police, governing officials, and the ubiquitous military bands in a crashing welcome to travelling royalty …’ (McGrew, Paul I of Russia, pp. 96–7). 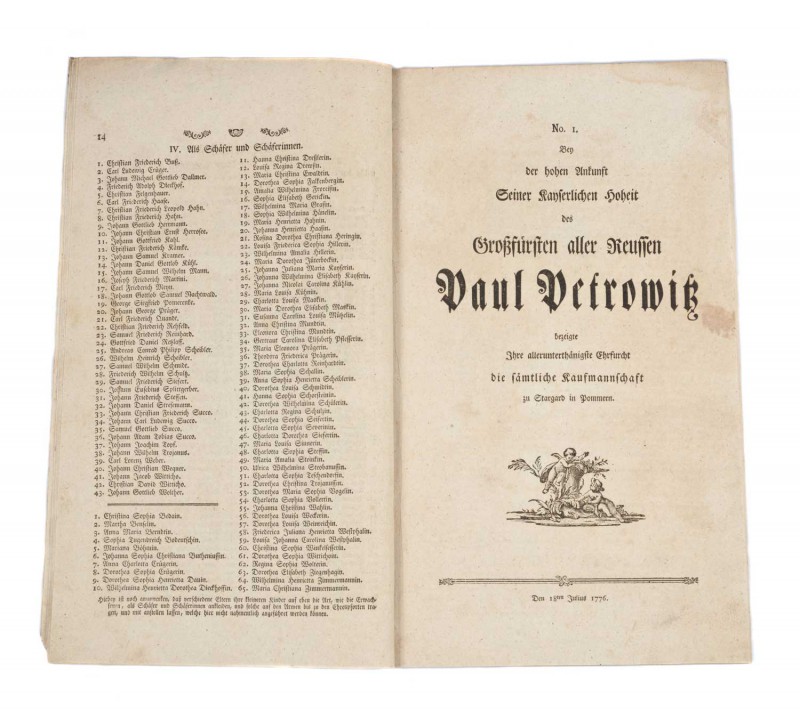 This printed account tells in great detail the provision for the visit, from the military men who made up the accompanying cavalcade, to the children—188 are listed, by name—who sang, danced, and dressed up specially as shepherds and shepherdesses; the decorations are described in some detail.  Something that’s particularly nice is the inclusion, as numbered appendices at the end, of eleven pieces of printed matter for the visit, all of which have been overprinted with heading numbers for purposes of cross-referencing in the descriptive text itself.  So we learn that the printed slips of poetry, printed here on different coloured papers, reflect various coloured sashes worn during the festivities and the poems recited. 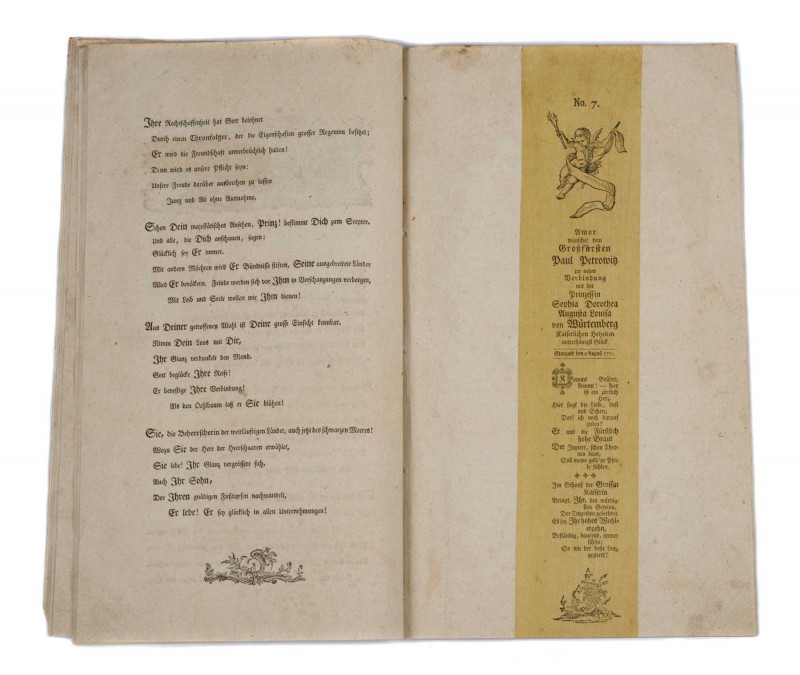 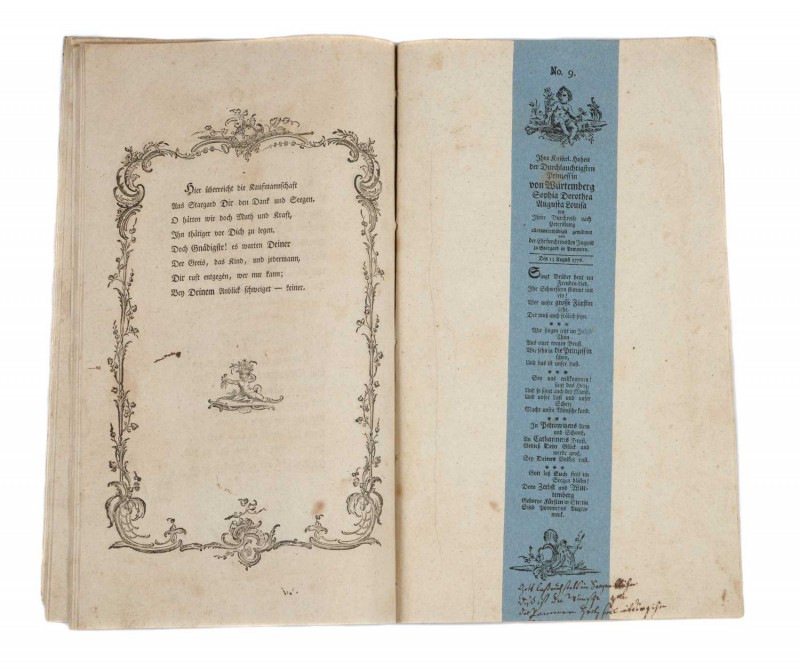 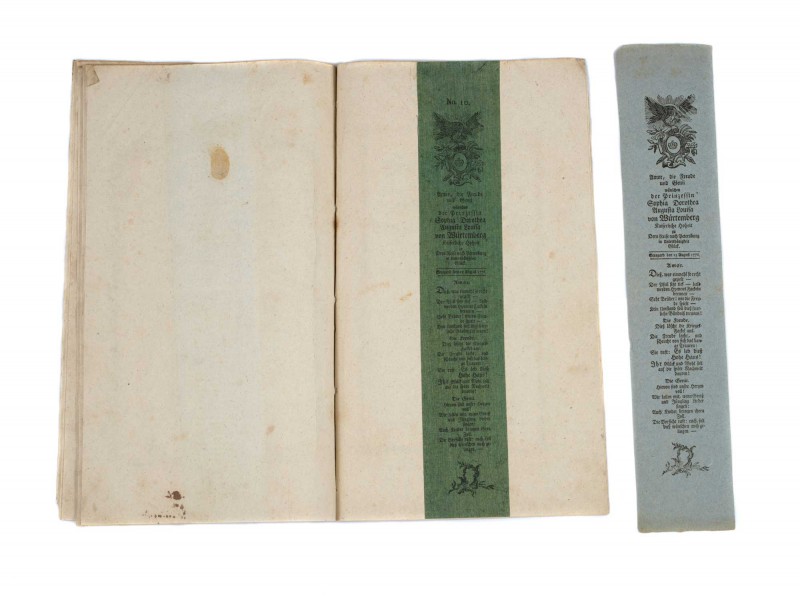 The book is listed in the Imperial Public Library’s Catalogue de la section des Russica (St Petersburg, 1873; B-1108), and a copy is recorded as having been held by the Staatsbibliothek zu Berlin before it was destroyed in the War.  Does that make this copy the only one to survive in the West?  It’s certainly a very rare book.

The collection will feature in a list of 18th-century material, due out next week.  Let me know if you’d like to receive a copy.

Posted in
Previous: A fat lie Next: DIY DNB