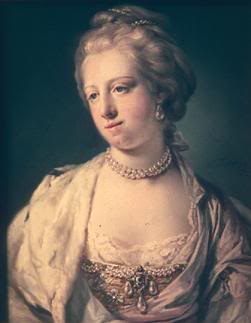 Princess Caroline Matilda (1751–1775), the youngest sister of George III, was married off to her cousin, Christian VII of Denmark, when she was only 15.  It was not a happy marriage.  Christian was a mentally unstable philanderer who claimed it was ‘unfashionable to love one’s wife’, and Caroline eventually drifted into an affair with the royal physician Johan Struensee, a rising star at the Danish court who effectively ruled the country for ten months as Christian’s mental health worsened.  Caroline and Struensee were arrested in January 1772; Caroline’s marriage to Christian was dissolved a few months later, and Struensee was executed.  In May, Caroline was deported, without her two children, to Celle in Germany, where she was supported by the Hanoverian exchequer.  She died three years later, of scarlet fever, aged 23. 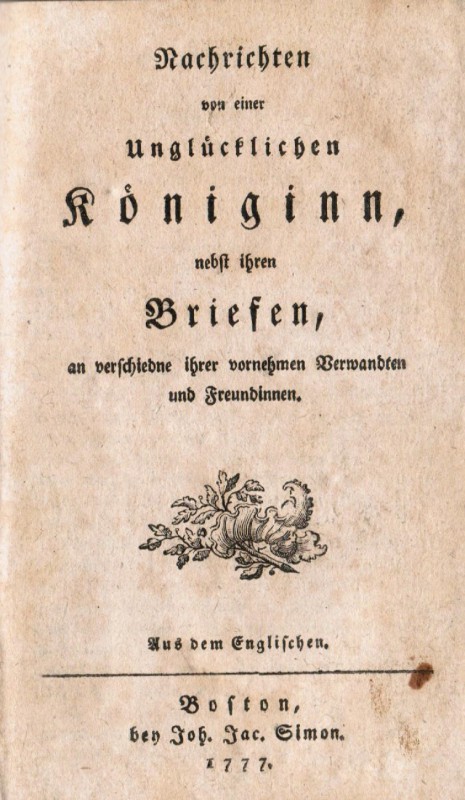 This is a translation of the spurious Memoirs of an unfortunate Queen, originally published in 1776 by the London bookseller, John Bew.  The public bought up two editions within the year, and Bew also brought out one in French.  That a German version should follow is not surprising, but the ‘Boston’ imprint most certainly is.  (The book was probably printed in Celle.)  Although you see ‘Philadelphia’ fairly regularly, ‘Boston’ struck me as unusual, and interesting.  The only earlier German book with a ‘Boston’ imprint, according to ESTC, is a small volume of sermons, Predigten von einem Bostonischen Geistlichen (1776), apparently printed in Bern.

You can read about another fictitious imprint, ostensibly the first book printed in California, here.

Posted in
Previous: How would you like your Karamazov? Next: Three Men in a Boat encounter Russian pirates

4 responses to “The unfortunate queen”