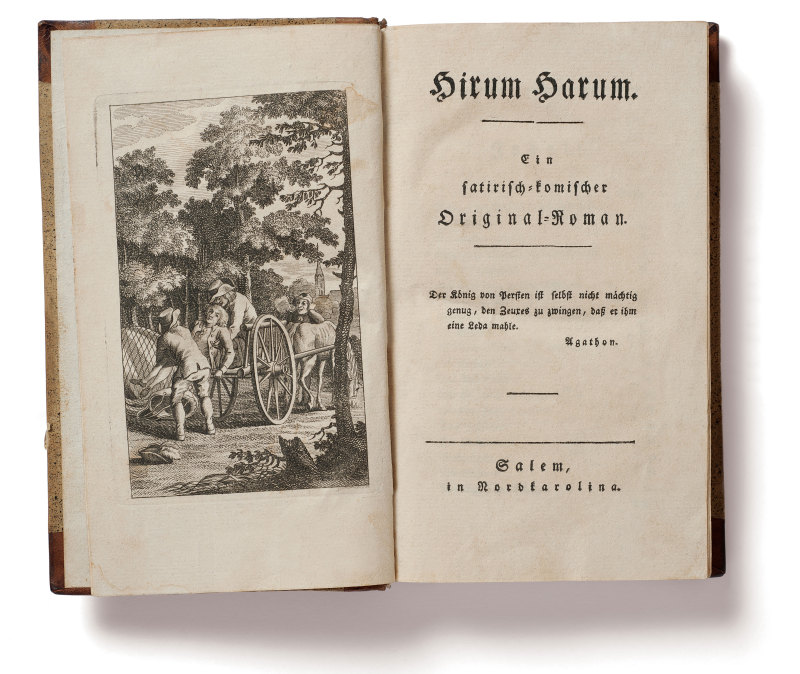 A few weeks ago, I wrote about a fictitious Boston imprint from 1777.  Here’s something in the same vein, or so I first thought: a German novel from c.1789, written by Johann Wolfgang Andreas Schöpfel (1752–1827).  Inspired by the craze for balloon travel that hit Europe and America in the 1780s, it opens with a balloon flight from Versailles which ends up in America, near Churchill.  (The frontispiece shows the hero being rescued after his crash landing, the balloon just visible in the background.)  The narrator, Crébillon, is immediately seized by American soldiers and pressed into military service, before becoming the gatekeeper in the town of Hirum Harum, where he is also put in charge of the local newspaper.  It is a comedy of manners, marriage, and small-town etiquette, though with occasional serious comment on political matters, such as employing foreigners in positions of authority.

This is an unacknowledged second edition.  The first included ‘bei H. Bagge’ in the imprint.  ESTC notes: ‘According to the Library of Congress, this was printed in Nuremberg.  The imprint appears not to be false, however, as Traugott Bagge was a storekeeper in Salem, NC.  Bagge’s name appears in the imprints of several German almanacs to be had of Bagge at his store, and it appears that some copies of the Nuremberg edition of Hirum Harum were printed for Bagge’.

One response to “Crash-landed in North Carolina”