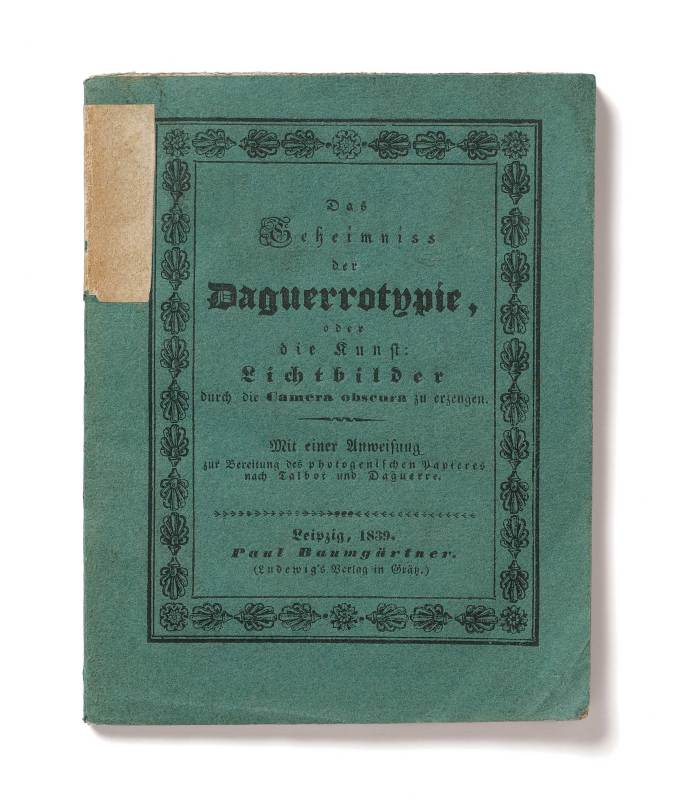 This little book (it measures only 138 × 108 mm), ‘The Secret of taking Daguerreotypes, or the Art of producing Photogenic Pictures with a Camera Obscura’, has been described as ‘the first photographic manual in the world’ (Gernsheim, Concise History of Photography (third edition, p. 11), and is also the first German publication on photography.

The year 1839 marks the beginning of photography as we know it today.  Although both Louis Daguerre and Henry Fox Talbot had been experimenting independently for a number of years on their different photographic processes, it was the daguerreotype which was first announced to the world, on 7 January 1839, by François Arago, secretary of the Académie des sciences in Paris.  Talbot responded with demonstrating his positive–negative process to the Royal Institution on 25 January, and then presenting a paper to the Royal Society on 31 January.  The official ‘birth date’ of photography, however, is generally seen as 19 August 1839, when Arago printed the full text of his report (Rapport … sur le daguerréotypie); Daguerre’s own Historique et description des procédés du daguerreotype … followed on 6/7 September.

The author here, Karl von Frankenstein (1810–1848), an Austrian writer of technical manuals, dates his preface ‘Juli 1839’, a month before the publication of Arago’s report.  The exact publication date of Frankenstein’s manual is not known, but it was being advertised for sale in the Klagenfurter Zeitung on 24 August, i.e. before Daguerre’s own manual.

The book itself is intended as a layman’s guide to photography, an intentional change from the earlier scholarly articles and official reports.  Frankenstein begins with a long account of Daguerre’s invention, including a discussion of the chemical reactions between light and various organic and inorganic materials, and the work of Talbot, Friedrich Gerber (a Swiss who had managed to fix images from a camera obscura with silver salts in the 1830s), etc.  This is followed by a chapter on the preparation of photogenic paper, describing first Talbot’s, then Daguerre’s method.