I remember back in 1996, when I was living in Germany, you could still buy good-quality music scores from Editions Peters in Leipzig very cheaply.  There I was, an impecunious student, scooping up cloth-bound editions of J. S. Bach’s choral works—which I still have, of course—for next to nothing.  When I asked about the low prices, I was told that they were old GDR stock and could not be sold at ‘Western’ prices. 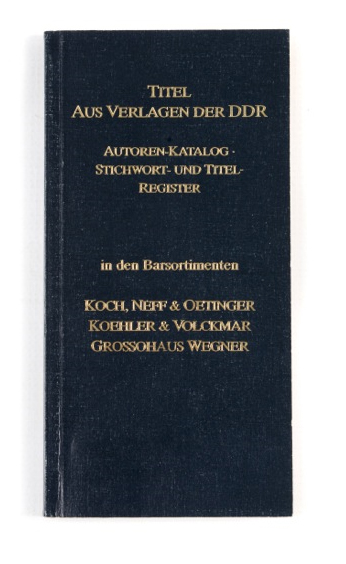 This book seems timely, as Germany celebrates the 25th anniversary of the fall of the Berlin Wall.  Dating from 1990, it’s a catalogue of some 2500 books published in the GDR which are now to be distributed in West Germany, with wholesale prices.  The deadline for the catalogue was 13 September 1990, only a fortnight after the reunification treaty was signed.  This little catalogue thus contains almost the entire book production of a state soon to be dissolved.

Posted in
Previous: Mushroom-eater Next: The Raft of the Medusa