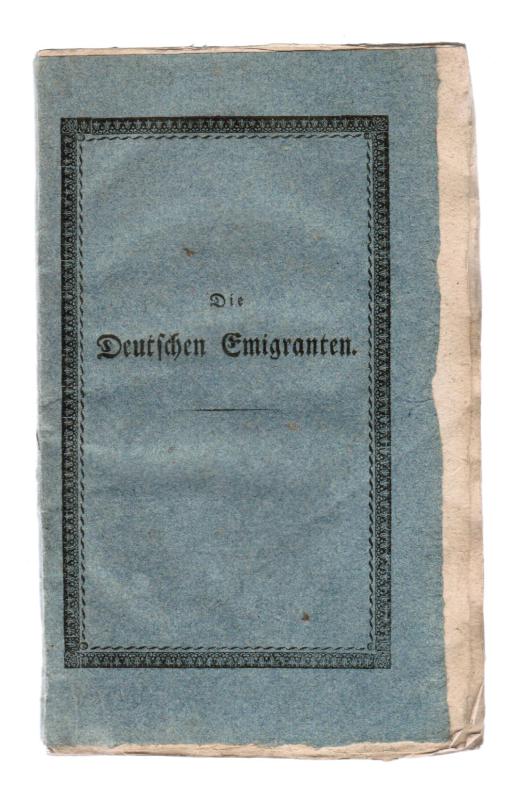 I had quite a bit of interest when I wrote about this book over on The New Antiquarian, so thought I’d share it here, too.  I’ve written before about a fictitious Boston imprint.  That book had no obvious connection with the United States, but this one does: it’s an early satire on emigration to America, from 1818. 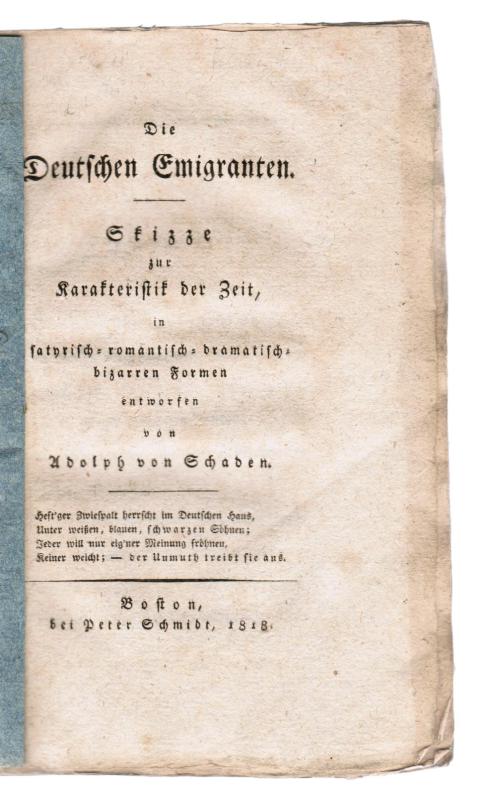 The author couches his satire in the form of a play, set on the deck of a merchantman bound for America.  Partly in prose, partly in verse, the ship’s captain leads discussions with representatives from around the German-speaking world, all driven to emigrate due to conditions in post-Napoleonic Europe: a former officer from Hesse, an Austrian parson, a speculator from the Rhineland, a Frankfurt Jew, etc.  The conversations range from education (one of the women on board, inspired by Pestalozzi, wants to set up a girls’ school) and economics (the Saxon waxes lyrical on Adam Smith and Le Mercier), to books (a printer from Baden has brought a set of type with him, with the intention of issuing reprints of British classics).

America is depicted as an Eldorado flowing with milk and honey (sic) before, as they near other side of the Atlantic, they realise how much it stinks.  Schaden (1791–1840), a young Berlin playwright, gives his view of emigration in his ‘prefatory sigh’: ‘We hereby freely and publicly acknowledge German emigrants to be people who have sadly lost their way, and that our satirical sketch has the intention to scourge no one but these deranged folk …’

Thousands of Germans, and others, who went to live in America in the nineteenth century surely held a different view.  A very Happy Thanksgiving to all my American readers.

Posted in
Previous: The Raft of the Medusa Next: Mystics and dandies