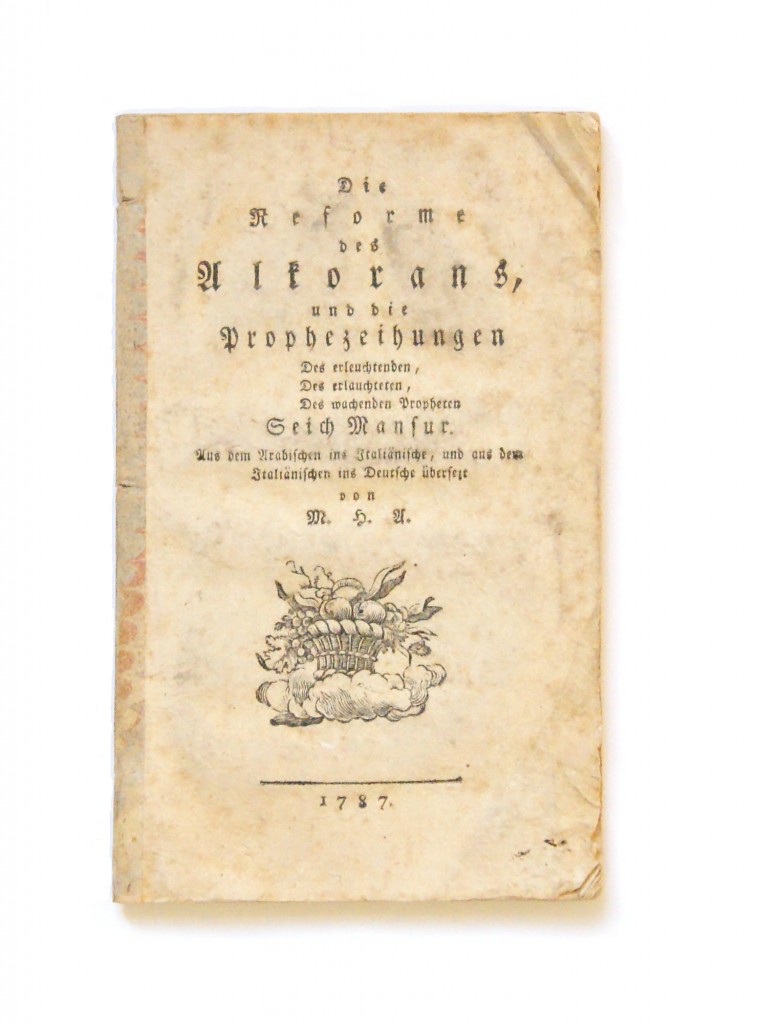 Sheikh Mansur was a Chechen resistance fighter who waged a six-year campaign against Catherine the Great’s forces before his capture in 1791, calling upon fellow Muslims to join him in jihad.  ‘He was the first to preach and lead … the Holy War against the infidel Russians in the Caucasus …  Dropped, as it were, from the clouds full grown, a warrior, preacher and prophet and, in spite of [his] many failures … he drew after him now one, now another, of the the fierce tribes of the mountain and the forest …  He it was who first taught them that in religious reform lay the one chance of preserving their cherished liberty and independence’ (Baddeley, The Russian Conquest of the Caucasus, p. 47).

Italian interest in Sheikh Mansur began in December 1785, with a piece in the Florentine Gazzetta universale on his defeat of Russian troops; by June the following year, the paper was announcing that ‘the celebrated Sheikh Mansur’s code for the reform of the Quran has been brought all the way from the Caucasus to Italy, and promptly translated from Arabic into our language.  The pamphlet is unique of its kind, and, in addition to the reform, contains some terrible prophecies by this new sectarian …  Some copies are available in Florence from Anton Giuseppe Pagani for the price of one paolo’ (quoted in Venturi, p. 96).

‘The pamphlet foretold a “great revolution” which was to be universal and egalitarian.  It was to take place in the year 1812, and in order to prepare the way for it, a “reform of the Quran” was necessary.  The reform would involve numerous changes.  No taxes would be levied on land …  A “general assembly” would set up a rapid and efficient legal system.  Slavery would be abolished …  The punishment of exile would also be abolished …  “You will also abolish tolls” …  “Lastly, you will destroy the big cities, which, like so many whirlpools, swallow up the provincial towns.”  Big cities were “the very portrait of contradiction”, “a receptacle for opulence and excessive misery”.  There was an “eternal struggle” between them.  “The peoples of many nations are sacrificed for the benefit of Constantinople, Paris, London, Rome, Smyrna and other large and populous cities which, like a diamond truly surrounded by dung, are a compound of spirit and stupidity, beauty and extravagance, greatness and depravity …  Where there is abundance, even excess of everything, there you will see numerous wretches dying of hunger; where the wisest laws are in force, all is disorder, and obstacles everywhere, impediments and difficulties lie in the way of true public good; and while on the one hand nothing is encouraged but ostentation, lust, pride, and the satisfaction of the most unbridled passions, on the other hand we see nothing but nakedness, humiliation, despair, oppression and slavery”’ (Franco Venturi, ‘The legend of Boetti Sheikh Mansur’, Central Asian Studies, vol. X, no. 1–2, pp. 96–7).

The Italian original, La Riforma dell’ Alcorano e le profezie dell’ aggiornante, dell’ illuminato, e del vigilante profeta Seich-Mansur, from which this very rare German translation was made, appears to exist in only one or two copies.  A modern reprint was published in 1992.

Posted in
Previous: Remembering Dostoevsky Next: Listen to this