Last month, over at The New Antiquarian, I wrote about uncut books: I love them, but not collating them.  But here’s something I had recently which made ‘collating’ (i.e. checking to see if it’s all there) rather more fun: 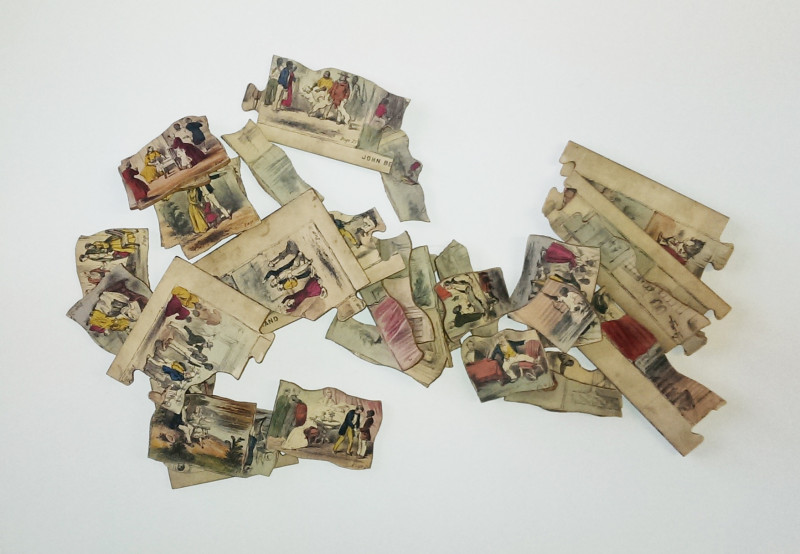 Published c.1860 by John Betts in London, it’s ‘a sheet of 22 coloured illustrations, dissected as a puzzle, adapted to the use of children’.  The website Uncle Tom’s Cabin & American Culture features a number of American jigsaw puzzles among its collection of ‘Tomitudes’.  This is an attractive British example, unknown to Hannas, who lists a different puzzle with ten, rather than 22, scenes (The English Jigsaw Puzzle 1760 to 1890, p. 130). 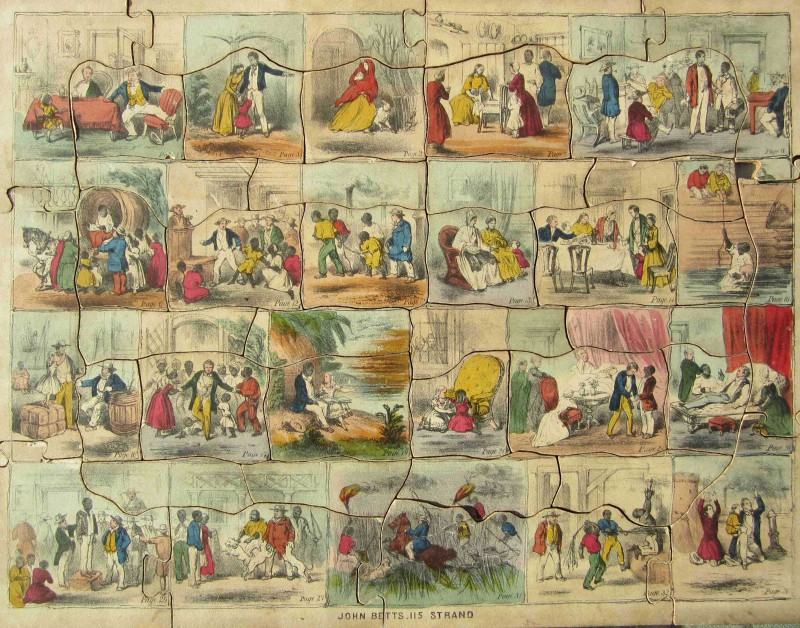 Louise L. Stevenson writes: ‘For European and American manufacturers of commercial items purchased with discretionary income, the appearance of a literary bestseller such as Uncle Tom’s Cabin offered a bonanza.  Because existing law did not deem that the characters, objects, and images associated with a text belonged to the author or copyright holder, anyone or any business might appropriate such a popular object and reproduce it for profit …  Of pre-twentieth-century bestsellers, Uncle Tom’s Cabin was unique for two reasons. It was an American book, and it generated more tie-ins than any other pre-twentieth-century book. Almost all these goods were produced for the expanding transatlantic market of middle- to upper-class consumers …  In the United States and Britain, commercial manufacturers of printed goods had responded immediately to the potential for Uncle Tom-themed items and in the post-Civil War years.  They continued to produce a plethora of paper products to support domestic decoration and play—mainly paper dolls, board games, puzzles, and Author card games, throughout the nineteenth century …’ (‘Virtue Displayed: the Tie-Ins of Uncle Tom’s Cabin’).

Posted in
Previous: Extreme and tendentious and loud Next: This is the man