With the California book fair now behind me, my thoughts turn to Edinburgh, where I shall be exhibiting 6–7 March.  As ever with fairs, what to take?  Here’s a candidate: 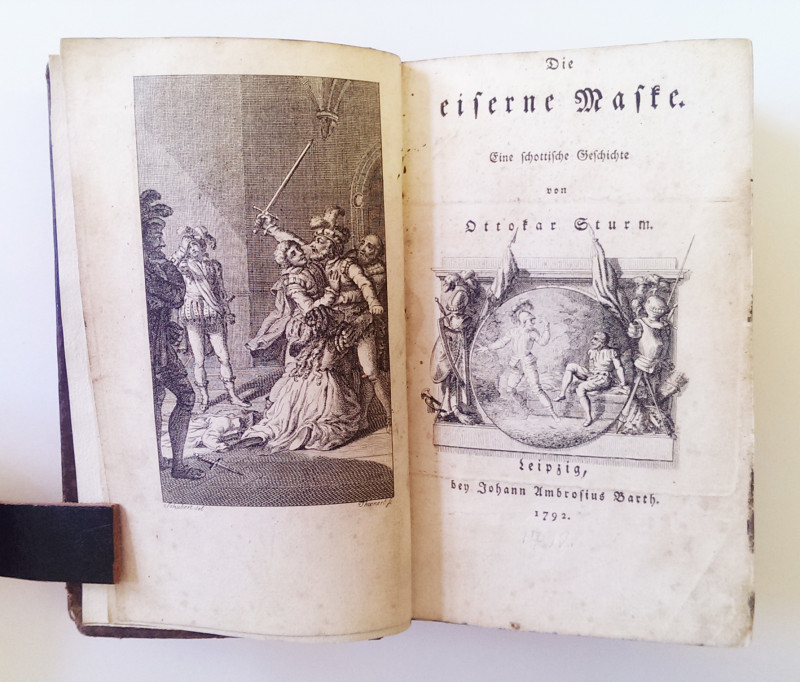 I’ve written before about Ossian, and the effect it had in Germany (not least, on Goethe), but I’d never heard of this book before: Die eiserne Maske.  Eine schottische Geschichte [The Iron Mask.  A Scottish Story] von Ottokar Sturm, from 1792.

‘Ottokar Sturm’ is a pseudonym for Friedrich Eberhard Rambach (1767–1826), a prolific writer of medieval adventures and horror stories.  He was a Berlin schoolmaster, and one of his pupils was the 18-year-old Ludwig Tieck, whom Rambach got to help in writing his own books.  To Die eiserne Maske Tieck contributed at least two Ossianic poems—his first published poems, no less, effectively his first literary translations from English—and a chapter and a half at the end.

The novel takes the theme of Schiller’s Die Räuber (1781) but transplants the action to the Scottish Highlands.  ‘This atmosphere was achieved by borrowing such names as Dunkan, Malwina, Carno, Toskar, Linuf and Dunchomar, all found in Ossian, as well as by introducing devices such as knocking on one’s shield as a challenge to fight, the cairn of four stones marking the hero’s grave, the emphasis on bleak and chilling imagery and the barren landscapes …  Two hostile brothers, Carno and Ryno, the sons of Tondal, are in love with Malwina, the daughter of Toskar, who has promised that she will be given to the one who proves himself the braver.  By nature the brothers differ greatly, Carno being the noble, valiant hero beloved by all, while Ryno is the spiteful and sinister one, everywhere despised and feared.  Tieck’s contribution to the novel was part of the seventh chapter and the whole of the following final one, in which his task was to depict Ryno’s mounting self-reproach for his cruelty towards his brother, and the ensuing destruction he brings upon himself …  The inevitable horror of the situation, inherent in the story as he had received it from Rambach, was coloured and intensified by his own experience …  This is a vital factor in the estimation of the role played by Rambach, for we see that Tieck’s interest in the horrific and demonic, recurring as it did throughout his entire literary production … sprang jointly from his own psychopathic disposition, conditioned by such stimuli as he found in his indiscriminate reading’ (James Trainer, ‘Tieck, Rambach and the corruption of genius’, German Life and Letters, 16/1, Oct. 1962, p. 30–1).

Although Die eiserne Maske has been reprinted in German in modern times, it has never appeared in English.

Posted in
Previous: For German children in Russia Next: American sympathy for the Bolsheviks