Later this week I shall be in Edinburgh, for the Edinburgh book fair.  In fact, as last year, I shall be travelling up there on World Book Day, a day which is all about getting children reading.  So, what better for this week’s post than a collection of fourteen children’s books, by the Russian son of a notable Scot: 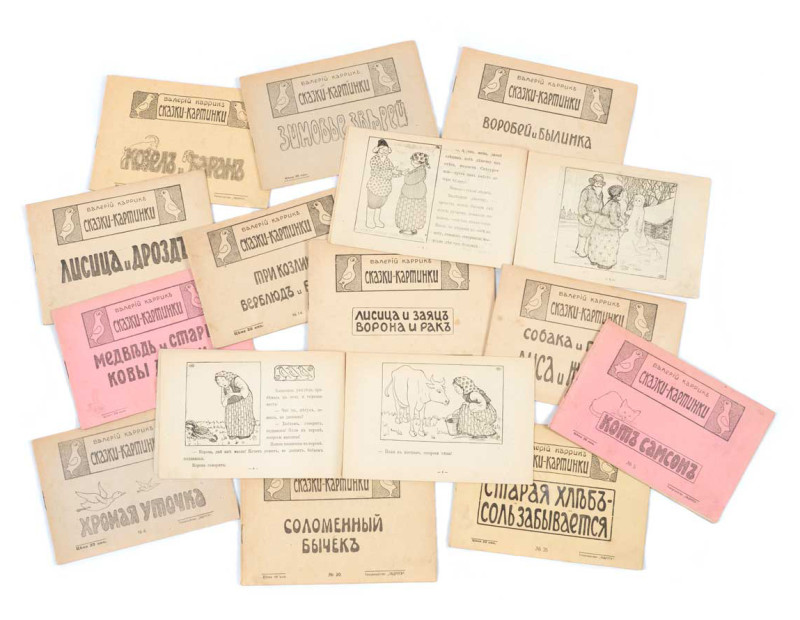 These charming little books (each one 127 × 193 mm, and 16 pages long), published in 1918, are the work of the illustrator Valery Carrick (1869–1943), the son of the famous Scottish–Russian photographer, William Carrick.  ‘He was left of centre and a number of his fairly outspoken political lampoons appeared in liberal journals in the early 1900s …  He and his wife Olga finally left Russia in 1918, but got marooned in Norway, as Olga is alleged to have had a superstitious fear of crossing water.  She died there in the mid twenties, he in 1943 during the Nazi occupation, but not at their hands’ (Felicity Ashbee, ‘The Carricks of St Petersburg’, The Caledonian Phalanx: Scots in Russia, National Library of Scotland exhibition catalogue, 1987, p. 103).

Many of Carrick’s illustrated fables—Greek, Norwegian, Lezgian, Ukrainian, as well as Russian—appeared in English as Picture Tales, translated by Nevill Forbes (Carrick’s cousin) and published by Basil Blackwell.

If you’re going to be in Edinburgh at the end of this week, please come along and take a look at these, and other books, at Stand 1.

Posted in
Previous: American sympathy for the Bolsheviks Next: Mrs Jarley's Waxworks