I am currently reading my way chronologically through Dickens’ novels.  I started this reading project last year, but as I’m not reading them back to back (and I’m actually quite a slow reader), I’m only as far as The Old Curiosity Shop.  With the tale of Little Nell still fresh in my mind, I was interested to come across this: 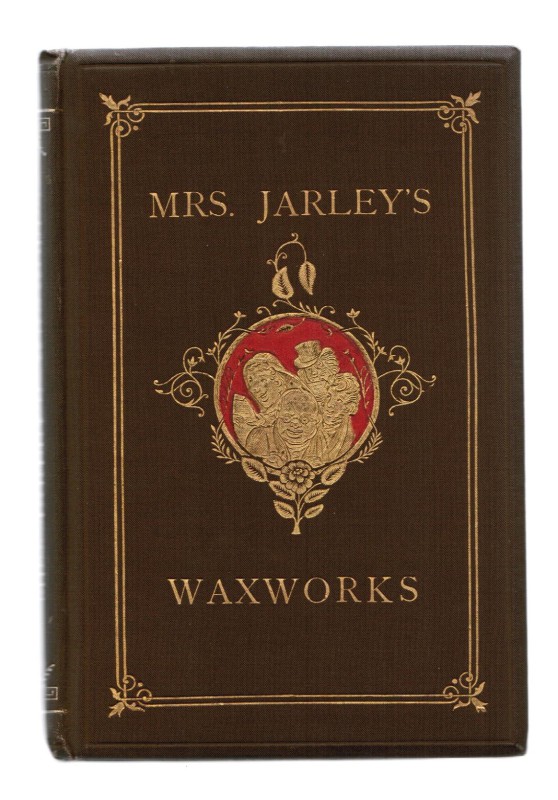 The book (apparently here in its first collected edition) describes how to put on various tableaux vivants of famous characters, both real and fictitious, in which the performers are presented in the guise of waxworks.  Mrs Jarley is but a minor character in Dickens’ novel, but the entertainments she peddles to Nell are here made flesh, and her travelling spectacle revived and expanded.  The scenes—dozens are here collected—see the ‘statues’ arranged on stage.  Following introductions from Mrs Jarley, who narrates throughout, each is seen to come briefly to life adding humour or a grotesque aspect to the vignettes.  Characters include Little Nell, Lord Byron, Childe Harold, Old King Cole, Little Red Riding Hood, Christopher Columbus, Robinson Crusoe, Lady Macbeth, King Lear, Juliet, and (in parts III and IV, drawn up by the English newspaper editor, William Gurney Benham) Harriet Beecher Stowe’s Uncle Tom, Shakespeare, Coleridge’s Ancient Mariner, William Tell, Guy Fawkes, Cinderella, Buffalo Bill, and Lewis Carroll’s Tweedledum and Tweedledee. 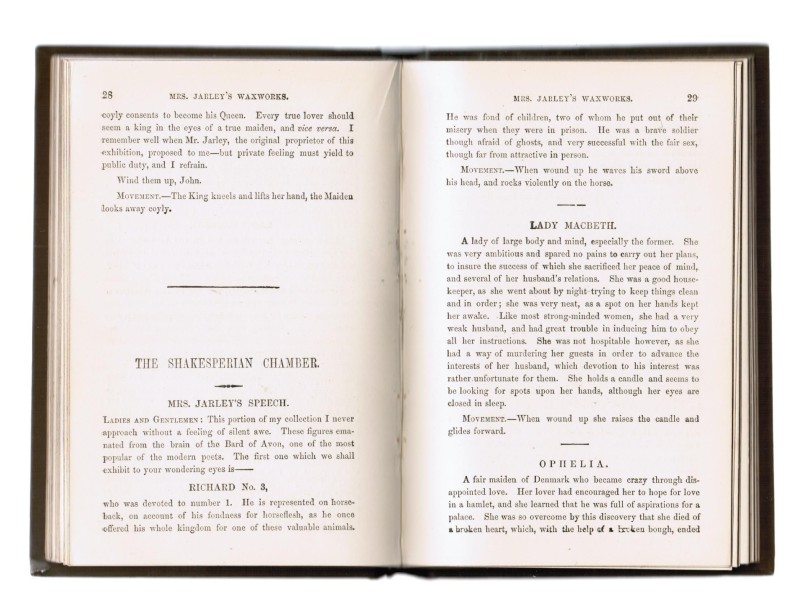 The original author, George Bradford Barlett (1832–1896), was a New Englander who wrote the popular Concord: History, Literary and Picturesque (which ran to more than fifteen editions in his lifetime), as well as poetic encomia to Massachusetts.  He evidently saw success with this theatrical effort, for there are many recorded examples of Mrs. Jarley’s Waxworks being performed in the church halls and temperance houses of New England.  Interestingly, the phenomenon enjoys literary echoes in the work of that other Concord native, Louisa M. Alcott (in Jo’s Boys, the titular siblings enjoy entertainments presented by Professor Owlsdark, whose ‘marbles’ have strong echoes within the present work), and Laura Ingalls Wilder, whose intrepid Ohio homesteaders visit a performance of ‘Jarley’s Waxworks’ in Little House on the Prairie.

Posted in
Previous: A Scot in Russia Next: A tramp abroad