This week I’m getting everything ready in preparation for the New York Antiquarian Book Fair, the weekend after Easter.  My books will go off on Thursday.  It’s always nice to take something new to a fair, so when the following came in recently I decided to keep it back for the booth in April: 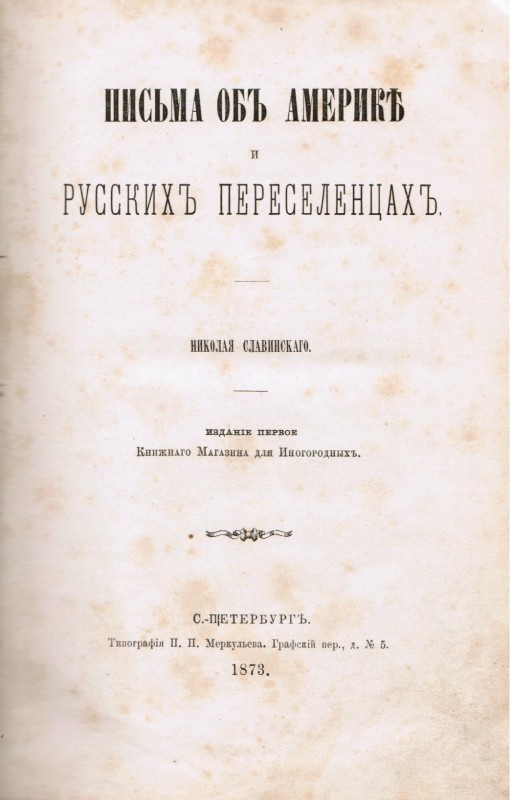 The title reads: Letters about America and Russian immigrants; this is the first edition in book form, published in St Petersburg in 1873.  Norman Saul picks up the story: ‘Concentrating on New York and the Russian exile community are the fascinating “letters” of Nikolai Slavinskii, serialized in Otechestvennyia Zapiski in 1872 and published as a separate book the next year.  A nobleman from south Russia, Slavinskii had come to America in 1869 to visit his sister, Mary Frey, who had accompanied her husband in a quest for free communal experimentation.  Colorful and detailed, his writings cover virtually all aspects of New York City life from the Bowery to Williamsburg to Thompson Square, where Russians congregated, and is one of the most intimate portrayals of the emerging metropolis.  He digressed at length on a number of subjects: the American press, with particular focus on the National Police Gazette and Harper’s Weekly; markets and food distribution, including a vivid description of Fulton Market; the new Chinatown; the medical profession and especially the role of women in it; police and crime; arson and the fire departments; cheap and efficient transportation systems; political rallies and parades (such as on St. Patrick’s Day); and minstrel halls, theaters, and concerts.  He deplored the general ignorance about Russia that he encountered but was surprised by a reasonably accurate portrayal of Peter the Great in a new play, The Tsarina, performed at a theater in Brooklyn.

‘Slavinskii seemed to be particularly interested in popular culture, visiting the San Francsico minstrel and other music halls, the Cooper Union lectures, the Beethoven Jubilee at the American Institute Coliseum with 3,000 singers and an audience of 13,000, and the skating rinks and beer gardens.  He noted that California wines were just entering the market, though whisky, ale, and beer were still dominant; described ice cream sodas (like ones in Odessa but better); and recorded that “Shoo-Fly, Don’t Bother Me” was the most popular song of 1870.  He was amazed by the number of female employees, the monopoly of domestic housework by African-Americans and Irish immigrants, the bustle and intensity of all work, insurance policies being sold on trains, the rapid ups and downs of personal fortunes, and the high level of crime and violence. 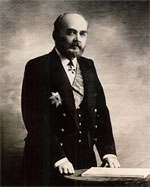 ‘Like most Russians, Slavinskii was intrigued by American Indians and devoted two “letters” to the subject.  He considered that their individual treatment was better than he had expected to find but bemoaned their collective, violent exploitation.  Of special interest is his narrative of the visit that an Indian delegation led by Chief Red Cloud made to New York.  He attended a theater presentation for the party and thought that the emphasis on military power in the performance was purposely to overawe the Indians.  But at Red Cloud’s Cooper Union appearance, Slavinskii was impressed with the chief’s cool dignity and his quiet but dramatic feeling of the Fetterman massacre of 1866.

‘Slavinskii’s main contributions, especially for his Russian audience, were his stories of the Russian community in New York, which numbered thirty or more.  Centred around “Dr. M.” from south Russia who had served with Garibaldi, the “circle” was attempting to fill a void by serving as an immigrant aid society for the increasing number of visiting Russians.  Dues were collected from those who could pay to help Russians upon arrival or in dire need.  Although encouraged by the support of the consul general Osten-Saken and by the building of a new Russian Orthodox church under Father Bjerring in 1870, the members still quarreled among themselves, primarily because they represented a varied and contentious lot of unhappy political misfits, as Slavinskii illustrated.  The portraits reveal an interesting spectrum of both Russian and American life …

‘Many became dejected and disappointed about life in the United States and returned home.  Slavinskii considered that the time spent in America had not been wasted but had been a “practical school.”  Not only could the community provide only limited help, but little sympathy could be expected from Americans who considered poverty a sign of laziness.  The generally higher-class Russian immigrants were frustrated by an inability to make use of their “intellectual talents” in the United States’  (Concord and Conflict: the United States and Russia, 1867–1914, pp. 211–3).

Posted in
Previous: A tramp abroad Next: Radicalisation as official government policy

One response to “Letters from America”