Back in December 2013, I wrote about the ill-fated Decembrist Revolt.  What I hadn’t realised at the time was that the plot to stage the coup was uncovered by an Englishman, one John Sherwood (1798–1867). 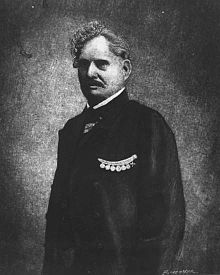 He was born in Greenwich, but left England as a child to go to Russia with his father, a mechanic who served as foreman at the Alexandrovsky cotton mill in St Petersburg.  The young Sherwood ‘seems to have had a good education, learning French, German and Latin, as well as English.  On leaving school he was employed as a teacher of English in a general’s household.  Unfortunately, he fell for one of his pupils, eloped with her, but on being caught up with, the young couple were parted, she to a convent, he to the army.  Eventually he was promoted to Lieutenant, and served among other places at Kherson, in the deep south, where one day he chanced to overhear some superior officers engaged in deep conversation.  It turned out to be a plot to assassinate the Emperor, which eventually culminated in the Decembrists’ Revolt of 1825.  Sherwood, being anxious to please the Emperor, wrote him a letter, which he entrusted to the Imperial physician, Sir James Wylie.  From the on, he was allowed a bodyguard, and asked the Emperor’s permission to join the Masonic lodge where several of the conspirators were active.  Eventually, the officers were detected and punished.  Sherwood was promoted to Captain, and decorated.  He and his father were awarded a pension for life, Ivan Vassilievich (John son of William) was given a coat of arms with the Imperial eagle in the centre, and became known as Sherwood-Verni (faithful).  Nicholas I thought it might be risky for Sherwood to remain in Russia, and suggested he should retire and settle in England.  But the Faithful one preferred to remain where he was, and his bonus was that his wife was restored to him’ (Michael Skinner, What we did for the Russians, p. 61).

I discovered all this when researching the following, the decree from June 1826 which rewarded Sherwood for his part in uncovering the conspiracy by naming him ‘Sherwood the Faithful’: 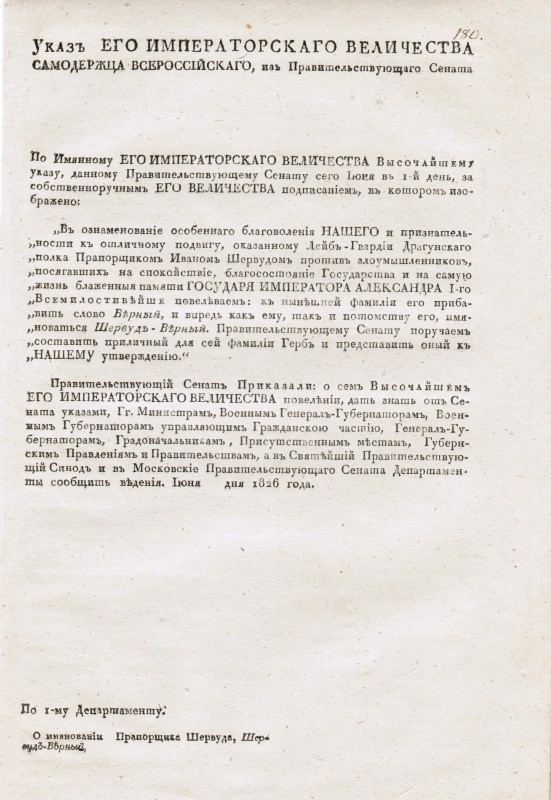 Posted in
Previous: The Human Slaughter-House Next: A 17-foot timeline