As regular readers of this blog will know, something I particularly like is cross-cultural material.  So this was a nice find: 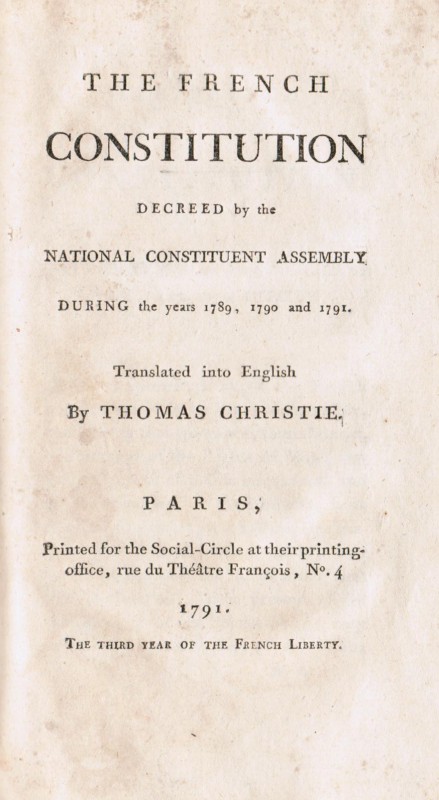 This is the first edition in English of the French Constitution of 1791, the first written constitution in France (based on the American model), and reluctantly accepted by Louis XVI.  It’s a very rare book.

The translator, the young Scottish political writer Thomas Christie (1761–1796), had spent six months in Paris in 1790.  ‘There he met, among others, Mirabeau, Sieyès, and Necker, and returned to England as an enthusiastic supporter of the principles of the revolution.  He published A Sketch of the New Constitution of France, and in the following year, 1791, joined the attack on Burke with his Letters on the Revolution in France and the New Constitution …  He returned to Paris in 1792, and was employed by the national assembly on the English part of their proposed polyglot edition of the constitution.  Only the English and Italian sections had appeared by the time that the assembly made way for the convention, and the republic took the place of the monarchy’ (Oxford DNB).  As Etienne Dumont remarked of the Constitution: ‘il y avait trop de république pour une monarchie, et trop de monarchie pour une république.  Le roi était un hors-d’œuvre: il était partout en apparence; mais il n’avait aucun pouvoir réel.’

Posted in
Previous: A 17-foot timeline Next: Capital Fun