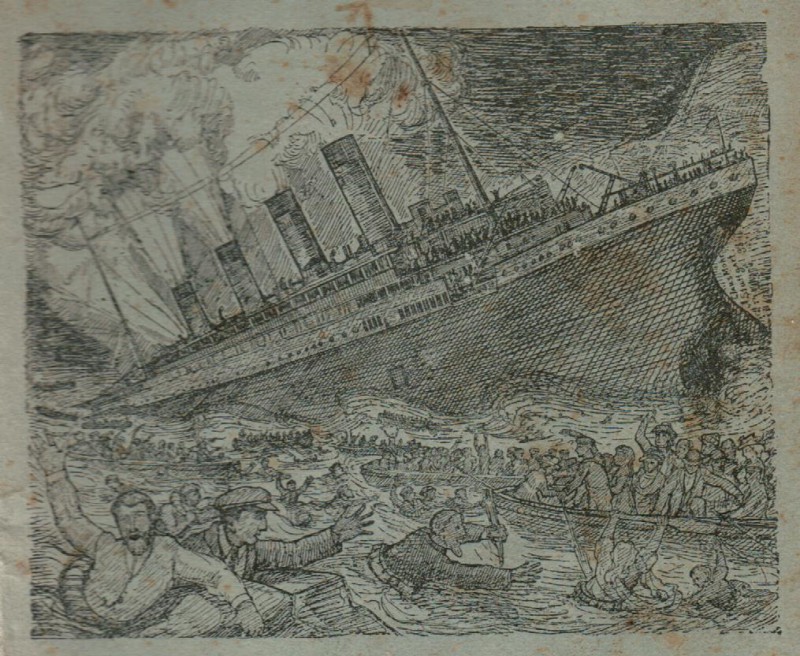 This graphic illustration comes from the cover of a book called Der Untergang des Titanic am 14. April 1912.  Eine Darstellung aller beim Untergang des Titanic historisch wertvollen Momente, a very early book on the Titanic disaster, and certainly one of the earliest German, which was published in Lorch, a small town just west of Schwäbisch Gmünd, in 1912.

The author, Bernhard Waag, draws together information from a variety of sources to create his book, which shows how early some of the superstitions and myths surrounding the tragedy were in circulation.  He cites Morgan Robertson’s strangely prophetic novella Futility, or the Wreck of the Titan (1898), the rumour of the cursed Hope Diamond, and sailors’ superstitions, before detailing facts and figures about the ship, and much information about icebergs, then the collision itself, and the aftermath (reports from London, Southampton, New York).  The whole is presented in short, journalistic bursts, with headlines in larger type.

On the copy I have here, a previous owner has written the following in pencil at the head of the front cover: ‘Eine neue Strafe Gottes(?)  Die Sintflut der Millionäre’ (‘A new punishment from God(?)  A Great Flood for the millionaires’).

As one might expect, the book is rare.  It was not picked up by Eugene Rasor for his The Titanic … annotated bibliography (2001), and is not listed as being held by any library outside Germany.

Posted in
Previous: Capital Fun Next: Touring London's bookshops, in 1807