‘No one buys more books than booksellers.’  This was the advice given to those setting out in the trade at the inaugural York Antiquarian Book Seminar last year by the American bookseller, Lorne Bair.  Lorne was talking about old books, but I suspect that the same may well hold true for reference books, too.  I enjoy the discoveries I make when cataloguing stock, but I also like to find new secondary literature, to help improve my knowledge in a particular area of book history.  So when I heard about this, I knew I had to get a copy:

‘German Printers and Booksellers in London: The Form and Impact of the German Role in the English Book Trade, 1680–1811’.  I have long been interested in foreign-language publishing in Britain (I recommend the British Library’s 2002 publication Foreign-Language Printing in London 1500–1900, if you’d like to find out more for yourself), and Graham’s new book is worth reading (though you’ll need to know German; there’s no English-language version).  It was also the book to which I immediately turned when the following came in: 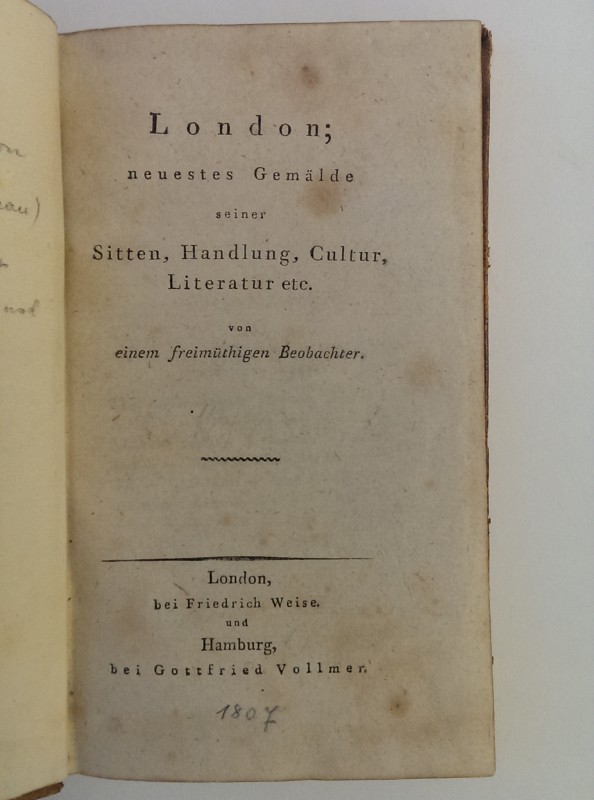 This is a very rare account of early nineteenth-century London by an anonymous German ‘honest observer’, who (according to the preface, at least) had been sent with despatches to the Court of St James following the Prussian defeat at Auerstedt (14 October 1806).  His remarks touch on contemporary English life and manners, often contrasting with France and/or Germany, with a particular focus on books and literature.  He notes that French, Italian, and even German, are read much more widely than twenty years before, and there are a larger number of foreign-language booksellers to cater for this: the ‘little Swiss’ Joseph Deboffe, a specialist for French books and now ‘a very rich man’; Dulau & Co. (‘a very large premises … in Soho Square’); De Conchy (‘an enormous number of French books, plus Italian and Spanish’); as well as English booksellers with links to Paris presses: Earle, Payne & Mackinlay, Boosey, Escher, Bohn, and Clerk, ‘and all the booksellers we call Antiquarios in north Germany.  All of them had a large number of Didot stereotypes on three kinds of paper, and at very reasonable prices’.

Jefcoate makes no mention of Weise, and I can find no book published by him in either COPAC, or the British Book Trade Index, perhaps suggesting that ‘London’ is here a fictitious imprint.

Posted in
Previous: A Great Flood for the millionaires? Next: Among Americans