Later this week, I shall be travelling to Utah and Nevada, en route to the RBMS Preconference in Oakland, which I am again sponsoring this year.  I enjoy the chance to catch up with some of my American customers, and find out about current issues in the rare book library world.  A month or so ago I came across a ‘Visited States Map’, where you can track the number of states you have been to (I don’t fare too badly), and it put me in mind of the following book which came in recently: 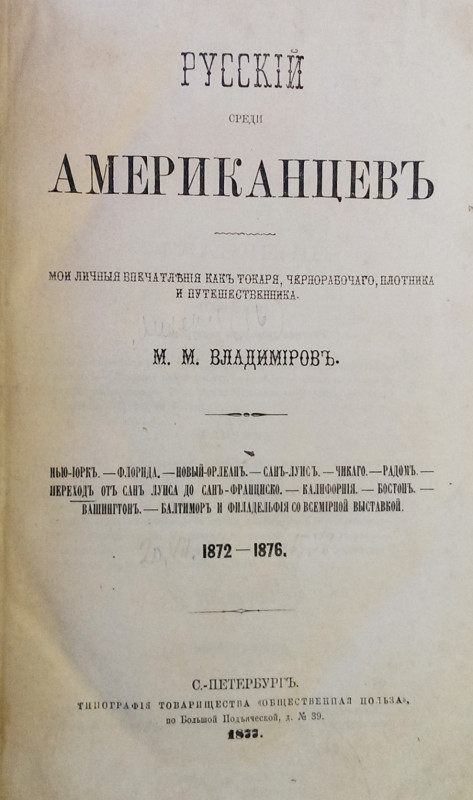 It’s the first edition of a book called A Russian among Americans.  My personal impressions as a lathe operator, unskilled labourer, carpenter, and traveller, by Mikhail Vladimirov, published in St Petersburg in 1877.  Vladimirov had grown up in Saratov on the Volga, and became interested in America from reading about it in novels and journal descriptions.  ‘Somewhat sobered by maturing experiences in the Caucasus and St Petersburg, he made the voyage across the Atlantic, arriving at Hoboken in August 1872.  Working his way around the country, Vladimirov would probably see more of the United States than any other Russian visitor of this period. 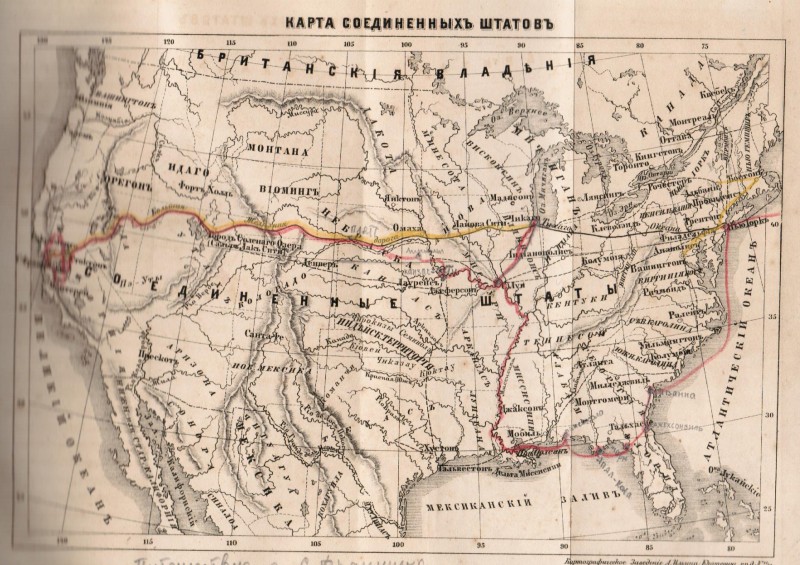 The map in the book, on which a previous owner has marked Vladimirov’s route in coloured pencil.

‘After the mandatory few weeks with the Russian community in New York [see my earlier post, on Nikolai Slavinsky, writing at a similar date], Vladimirov journeyed south through Savannah to Jacksonville, Florida, where he began his toils in a flour mill, then at a sawmill.  He moved on to Tallahassee early in 1873 to work at a convent and on a farm.  He then jumped from job to job, with the longest stint as a stevedore in Appalachicola and Pensacola, before finally making his way to New Orleans in the summer of 1873.  Affected by the depression that year, he went north to St Louis, shoveled dirt for a tunnel project, and took odd jobs as a carpenter and bricklayer. 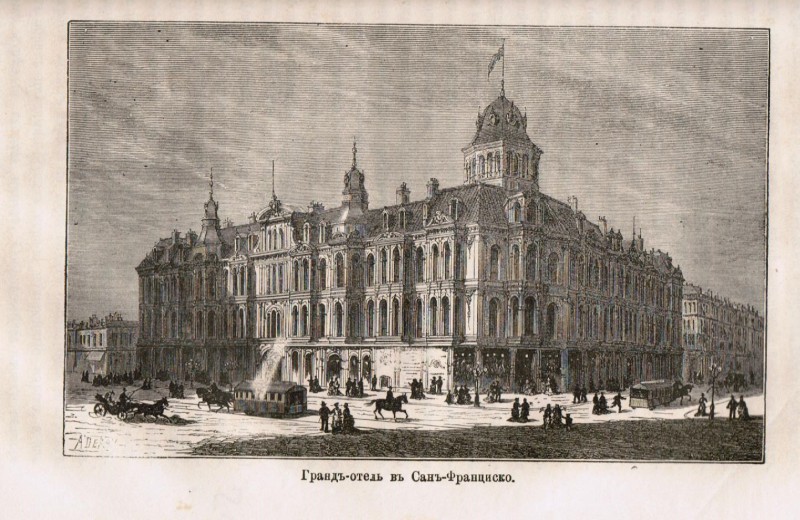 ‘Taking to the road again, the itinerant Russian tried his luck in Chicago …  By April [1874] he was once more on the move—to San Francisco, through Kansas City and Omaha …  He hopped freight trains through Wyoming, ran completely out of money, and was forced to join a railroad work crew in Utah in order to eat.  By June he had reached California, where he found pleasanter and more lucrative employment as a tutor for children of a Russian-Alaskan family.  Now able to sightsee at leisure, Vladimirov toured the state during the eighteen months he spent there, visiting the Bay Area, Yosemite, the redwood forests, and Fort Ross. 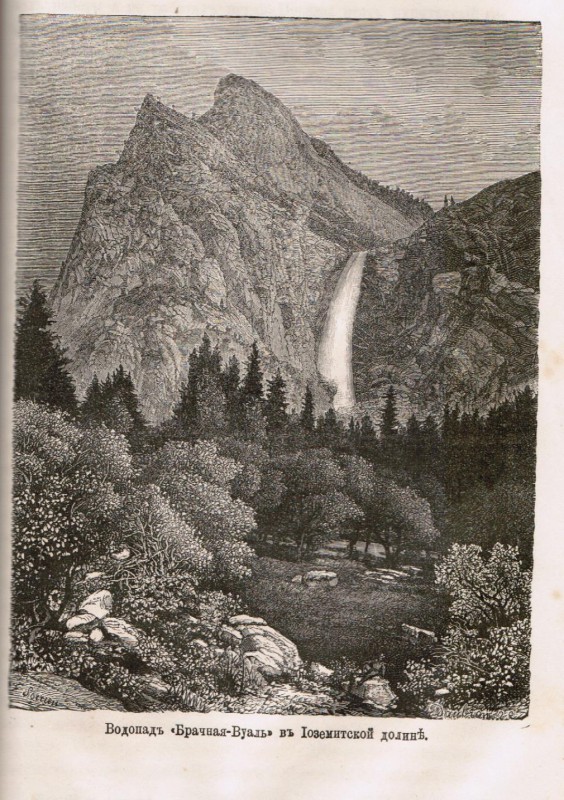 ‘Vladimirov saved enough money for a train ticket all the way to Boston, via Detroit and Niagara Falls, and for an extended tour of the East Coast—New Haven, New York, Washington, Baltimore, and Philadelphia [where] he found work as a carpenter on Centennial buildings and stayed on to examine the exposition before departing for home. 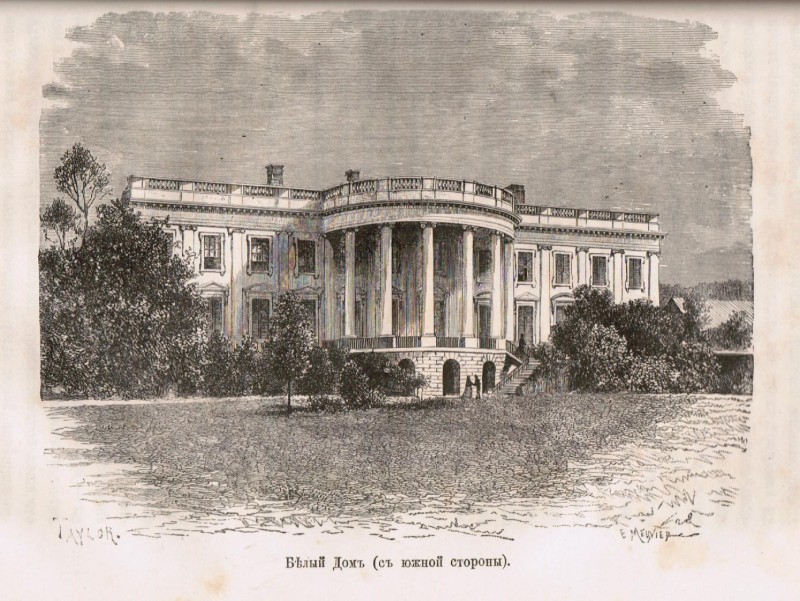 ‘Vladimirov’s book about his far-flung adventures did not glorify America since his focus was on the underside, the impoverished and depression-afflicted part of society.  Yet he balanced the desperation of unemployment with the variety of jobs available, poor pay with the cheapness of housing, exploitation with the generally good relations between bosses and workers.  Everywhere he found educational opportunities and personal successes as well as dejection and failure.  In conclusion, he did not regret the experience but would not recommend it to others; there was no place like home’ (Norman E. Saul, Concord and Conflict: the United States and Russia, 1867–1914, pp. 223–5).

Posted in
Previous: Touring London's bookshops, in 1807 Next: On m'accuse?