If you’ve been following my blog for a while, you will know that I am interested in the reception of Anglophone literature abroad, and of foreign literature in the English-speaking world.  One figure in this area who cannot be ignored is Henry Vizetelly (1820–1894), publisher, journalist, and editor, whose defiance of censorship and policy of issuing cheap reprints exerted a considerable influence on British publishing, not least the demise of the three-decker. 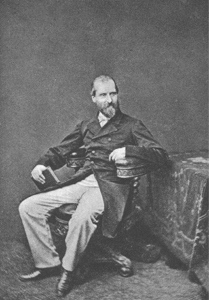 Vizetelly published Dostoevsky, Flaubert, Gogol, the Goncourt brothers, Tolstoy and, famously, Zola.  ‘During the period from 1884 to 1889 Vizetelly published translations of seventeen Zola novels and one volume of short stories in various editions, most of them selling for six shillings or less, with a total distribution of more than a million copies.

‘Despite the fact that these works were “softened and chastened” for the English reader, in 1888 they came under attack by the National Vigilance Association.  Vizetelly was charged with publishing obscene libels, particularly Nana, The Soil (La Terre), and Piping Hot! (Pou-Bouille).  When Vizetelly was brought to trial in September, 1888, the Director of Public Prosecution took over the case against him.  After a postponement until October 31, Vizetelly was found guilty, fined, and enjoined from publishing Zola translations.  Nevertheless, claiming to understand that only the specified works were forbidden, Vizetelly continued to publish Zola, and in May 1889, he was tried, convicted, fined, and imprisoned for three months. 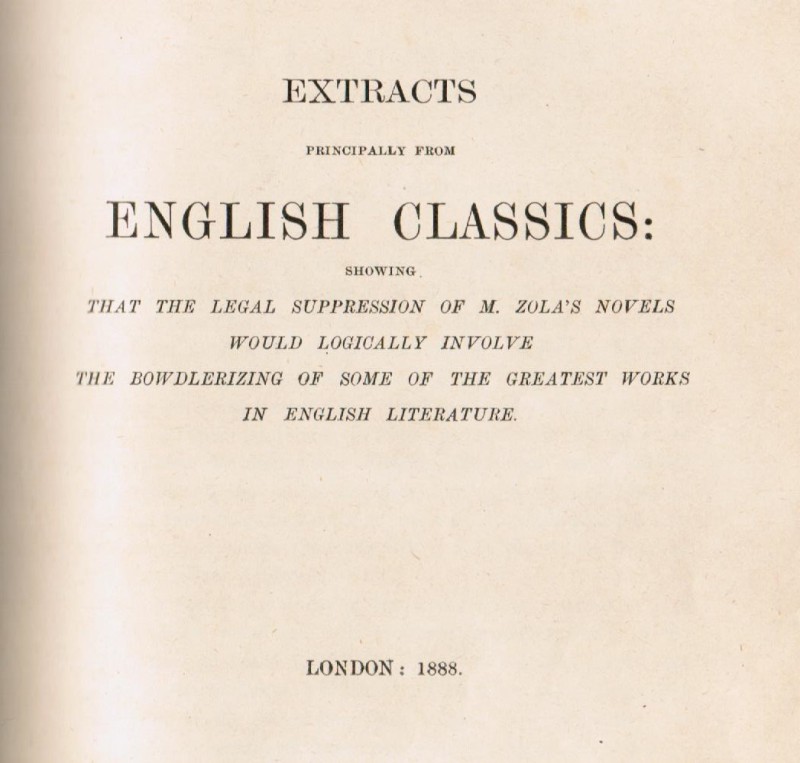 ‘Perhaps the most interesting and curious result of the affair is a small volume issued by Henry Vizetelly in 1888 …  Extracts principally from the English Classics …  This eighty-seven-page work begins with an Introduction which quoted Macaulay defending Restoration comic writers; Andrew Lang, Henry James, and Edmondo de Amicis on the seriousness of Zola’s work; and Zola himself on the scope and purpose of the Rougon-Macquart series.  Then follows a selection of passages from Shakespeare [via Beaumont & Fletcher, Jonson, Dryden, Congreve, Defoe, Swift, Fielding, Smollett, Sterne, Byron, Rossetti, etc.] to Swinburne in which reference is made to fornication, whores, and related topics.  Added to the book is a four-page letter, dated September 18, 1888, addressed to Sir A. K. Stephenson, Solicitor to the Treasury, in which Vizetelly protests the intervention of the government in the case against him and asks if the works of the authors from whom he draws his selections are also to be suppressed.  Although an impressive collection of bawdry, the Extracts proved ineffective in Vizetelly’s defense’ (William E. Colburn, ‘The Vizetelly Extracts’, Princeton University Library Chronicle, Vol. XXIII, No. 2 (Winter 1962), p. 54–5).

Posted in
Previous: Among Americans Next: Organising a library