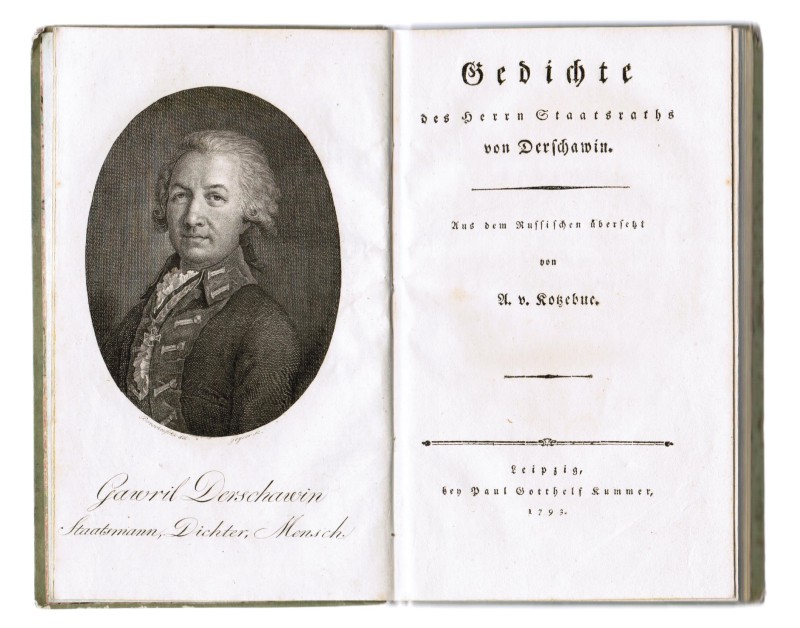 This book of verse is the first appearance in German (or any other foreign language, for that matter) of Gavriil Derzhavin (1743–1816), one of Russia’s great eighteenth-century poets.  It’s a very early translation.  French readers had to wait until 1811 (Dieu, tr. Golenistcheff-Koutouzoff, printed in Moscow), English readers until 1821 (John Bowring’s Specimen of the Russian Poets, the first appearance of Russian poetry in English), before anything by Derzhavin was translated.

The translator here is none other than August von Kotzebue (1761–1819, best known to English readers, if at all, as the author of Lovers’ Vows, the play in Mansfield Park), who spent much of his career in Russia.  You can read about his connections to the English-speaking world in a blogpost on the British Library website. 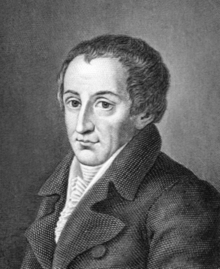 Kotzebue includes eleven pieces here, all rendered in German verse, among them the powerful ‘Ode on the Death of Prince Meshchersky’, ‘Verses on the Birth in the North of a Porphyrogennete Child’, dedicated to the future Alexander I (‘one of the first odes by Derzhavin in which he disregarded the prescriptive classical requirements of the genre to the extent of mixing “high” and “low” styles, standard mythological references and Russian country scenes, to suit his own imagination’, Terras), his ‘Felitsa’ poems, which ‘broke all the rules by addressing the Russian autocrat [i.e. Catherine the Great] in a personal, wittily conversational tone …’ (ibid.), ‘The Vision of Murza’, the first urban landscape description in Russian poetry, and the famous ‘Ode to God’.

Posted in
Previous: Binding variants Next: Life in the pit