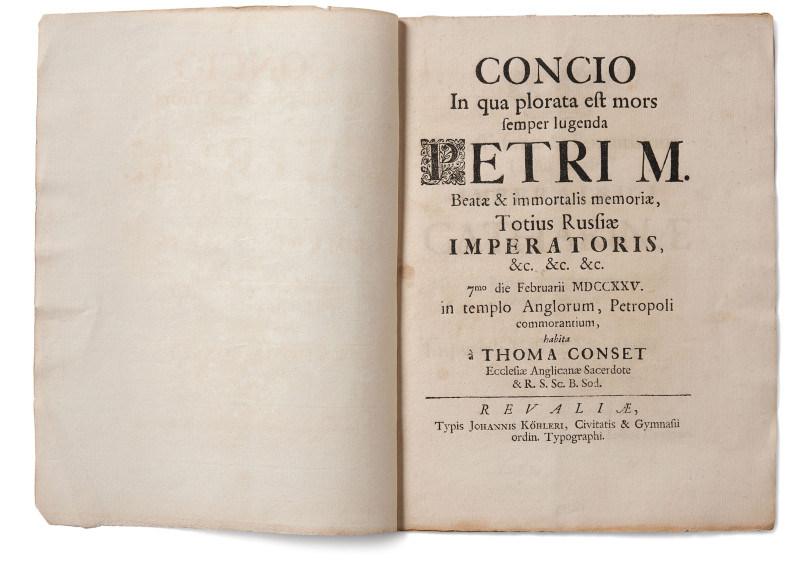 This is the first edition of Thomas Consett’s sermon at the English Church in St Petersburg following the death of Peter the Great, the first oratorical response to the Tsar’s death (Berkov, p. 13).  It was printed in Reval (present-day Tallinn, Estonia).

Consett (1678?–1730) was the first chaplain to the British Factory when it moved to St Petersburg in 1723, but he had served in Moscow and Archangel from 1717.  He spent nearly ten years in Russia, making wide contacts there and drawing together materials for his important book, The Present State and Regulations of the Church of Russia (1729), published after his return to England in 1727.  In St Petersburg, ‘Consett soon established his reputation as an erudite scholar, “known for his philosophical, theological and philological works, which will bring immortal glory to his name”, according to a contemporary assessment.  In May 1724 he was elected a corresponding member of the Brandenburg Society of Sciences (as the Berlin Academy of Sciences was then known) through the good offices of Baron Heinrich von Huyssen, one of Peter [the Great]’s closest associates and apologists, recommending him as “assidu à traduire plusieurs ouvrages Russes et Latin ou Anglois et à recueillir les curiosités de ce pais” …  In St Petersburg Consett moved in circles close to Peter, which included the Bishop of Pskov, Feofan Prokopovich, and other influential members of the Holy Synod … Consett’s residence in the Russian capital, spanning the last years of Peter’s life and much of the reign of Catherine I, and his access to information about not only ecclesiastical but also political matters made him a valued correspondent for the British government …

‘There is no mistaking Consett’s own sympathies for Peter and his consort, which he conveyed forcefully in two sermons delivered to his congregation on 30 July/10 August 1724 in celebration of the recent coronation of Catherine [unpublished; a manuscript copy survives in the private library of Peter the Great, now at the Academy of Sciences, St Petersburg] and on 7/18 February 1725 in Peter’s memory …’ (Anthony Cross, By the Banks of the Neva: chapters from the lives and careers of the British in eighteenth-century Russia, 1997, pp. 95–6).

Here is a flavour: ‘He was one of the eminent and most powerful princes, whom the divinity itself called gods.  And he truly governed this huge and vast empire like a god, bestowing his presence in the furthest corners of his empire with tireless constancy, illuminating and vivifying his people with the brilliant and refreshing rays of his majesty; achieving all his endeavours and undertakings with invincible power; inventing and comprehending so many and such various things—with great intellect and immense knowledge of almost everything—to such an extent that we should be astonished when we reflect how great his mind was to grasp all these things’ (p. 12).

Posted in
Previous: Life in the pit Next: The Adventures of Bob