A couple of years ago, I wrote about a piece of music written in celebration of Russia’s victory over Napoleon in 1812.  Here’s another book produced in the wake of the campaign, but this time it’s a novel.  In fact, according to Anthony Cross (The Russian Theme in English Literature, p. 23), it’s the first English novel to respond to Napoleon’s ill-fated Russian campaign. 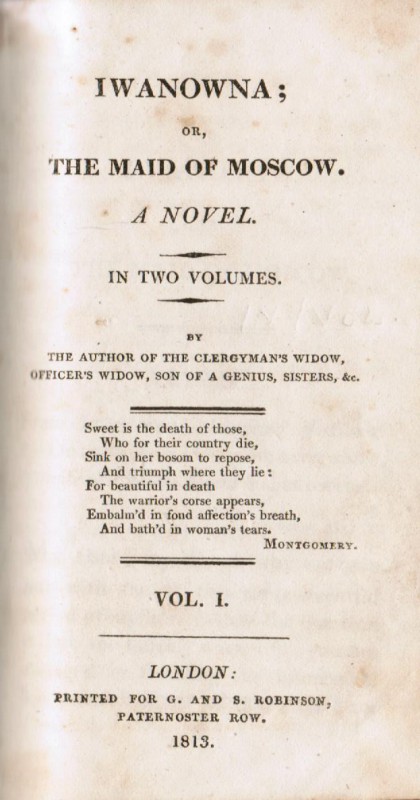 The author was the prolific nineteenth-century writer Barbara Hofland (1770–1844), and her eclectic cast of characters and settings reminds a modern reader of the sprawling war epics of later Russian novelists.  The eponymous heroine faces the usual setbacks in love, but these are framed against an acutely conceived contemporary political backdrop; the first ‘letter’, from the spirited Iwanowna to her sister Ulrika, is dated just a month before Napoleon’s invasion, and his motives and movements are heatedly discussed in the novel.  As the conflict unfolds, Hofland’s characters provide a surprising amount of detail regarding the campaign, such as the requisition of horses by the Russian government.  The pretence for this level of military knowledge is Ulrika’s marriage to a Russian general, and Iwanowna’s suitors and adventures in that sphere.  One month before Napoleon invades Hofland’s characters anxiously ponder the likelihood of his doing so, and it is from the general’s perspective that the reader learns of the Russian victory, and that ‘Herman Platoff offers his daughter, with an immense dower’ to the soldier who captures Napoleon.  The anti-Napoleonic bias works well in the Russian setting, offering an alternative to the usual British invective. 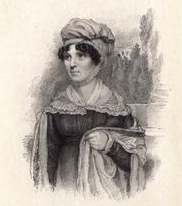 The novel was even dramatized: in 1816, Sadler’s Wells advertised a production entitled ‘Iwanowna, or The Maid of Moscow, which will introduce a grand panorama of Moscow in Flames’.  Quite how much of Hofland’s material was used in this play or tableau vivant is hard to determine, although her stirring account of the Fire of Moscow (14–18 September 1812), during which Napoleon entered the city and the Russian troops, and many of the populace evacuated, would certainly transfer well to the stage.

Posted in
Previous: The Adventures of Bob Next: Your future on the cards