I like things like this: a rare game of divination, published in Graz, Austria, in 1846, which shows the international legacy of Marie-Anne Lenormand, who had died three years before. 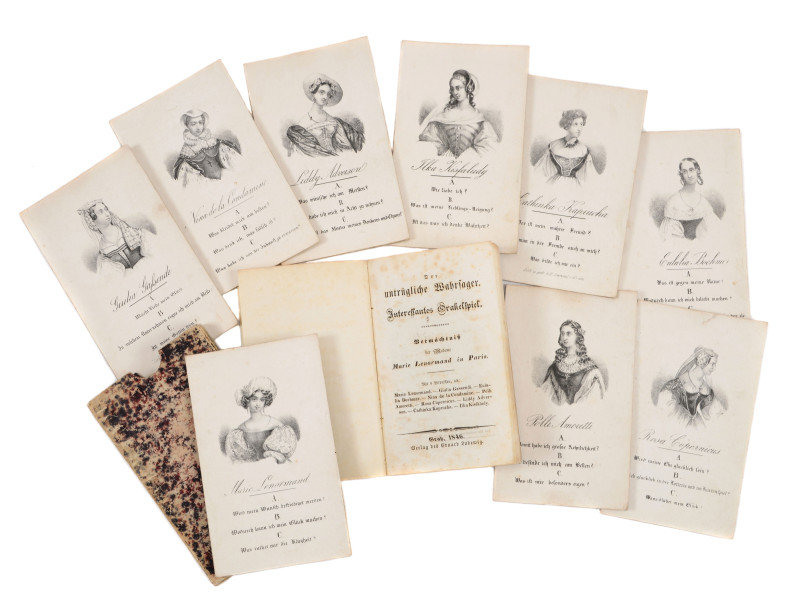 Marie-Anne Lenormand (1772–1843) was a clairvoyant, publisher, and self-publicist extraordinaire.  Orphaned at an early age, she was raised in a Benedictine convent where she first came to believe in her powers of fortune-telling.  Instead of taking orders she moved to Paris, where she began to ply her trade.  Extraordinary success followed, and at the height of her career she is said to have advised the likes of Robespierre, Talleyrand, Metternich, and the Empress Josephine herself; others argued that the whole thing was a sham, and she was frequently arrested, spending several weeks in prison.

Whatever the truth about her soothsaying abilities, Lenormand was certainly a canny publicist who promulgated notions of her own exclusivity, and maintained a physical air of exotic mysticism.  This self-fashioning impulse extended to books, and she published quite a number.  Her literary career began in around 1810, when she purchased the retail premises of the bookseller Fréchet in the rue Saint-Sulpice.  Crucial to her success was her ability to give only tantalizing hints at the specifics of her craft; the books were not instructions in the art of divination, but often scandalous and always controversial commentary on her life and times.

Lenormand was a European phenomenon.  The cards in this game depict, as well as Lenormand herself, fortune-tellers from Naples, Leipzig, Brussels, Milan, Stockholm, London, Warsaw, and Pest.  The game begins by one player, denoted ‘Zooraster’ (sic), shuffling the cards.  Each player then draws a card, lays it down, and chooses one of the questions printed on it (‘What do I wish for most?’, ‘Is my wife faithful?’, ‘’Who is my true friend?’, etc.).  Zooraster then finds the corresponding page of answers, numbered 2–12, to that question in the book.  A roll of two dice then leads to an answer to the original question.

Posted in
Previous: A novel response to Napoleon Next: The Grand Old Duke of York