I have a soft spot for glees, a peculiarly English genre of unaccompanied part-song which developed from the madrigal in the eighteenth century.  Percy Young, in his introduction to The English Glee, notes that ‘such music was in the first instance cultivated by lay clerks and vicars choral as respite from the rigours of professional duty’, by which he means these were the songs sung by the men of cathedral choirs after evensong, in the pub.

You see published collections of this kind of music on the market, but I’d never come across this format before: 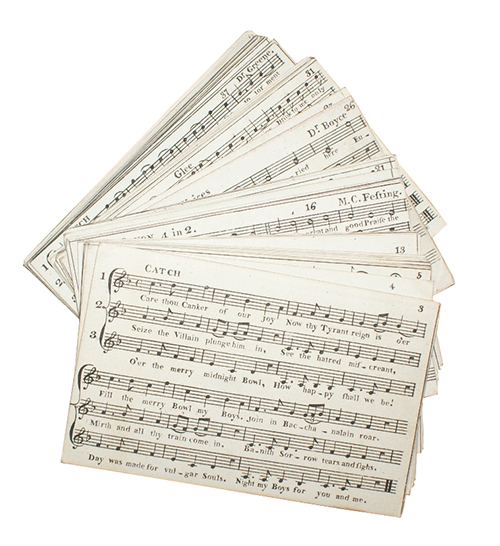 This is a copy of The Vocal Pocket Companion being a Select Collection of the most Favorite Catches, Glees and Duetts, for Two & Three Voices (London, c.1785), which consists of 52 engraved cards, each 82 × 125 mm; each song takes up one card.  It is dedicated by the editor, George Smart, to the political hostess Fanny Crewe (1748–1818).  The pieces themselves include works by earlier composers such as Thomas Brewer, William Byrd, John Hilton, Henry and William Lawes, and Henry Purcell, as well as eighteenth-century musicians, both well known (Thomas Arne, William Boyce, Maurice Greene, William Hayes, John Travers) and less so (Luffman Atterbury, Joseph Baildon (‘an excellent composer of glees and catches’, according to David Baptie in his Sketches of English Glee Composers, 1896), Michael Festing, Edmund Gregory, Henry Harrington, Charles King).

Smart brought out a follow-up set in 1789/90: The Vocal Pocket Companion, being a new Collection of the most favorite Catches Cannons Glees and Duetts for Two Three and Four Voices, but no other publisher appears to have followed his lead in issuing glees in this way.

Posted in
Previous: Moscow: an Ode Next: A cat-headed goblin