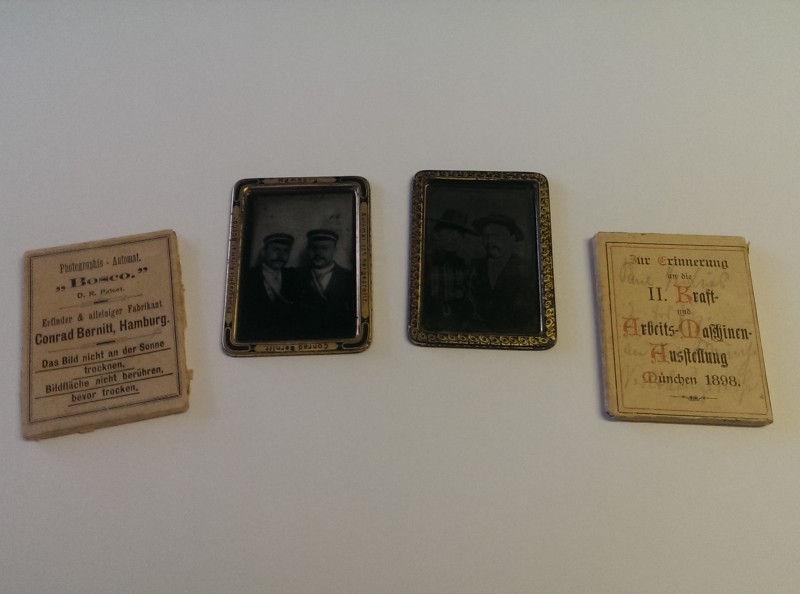 These are rare examples of the first ever photo-booth photos.  The Bosco-Automat, a portable photo booth, was patented by the German inventor Conrad Bernitt in 1890.  There had been an earlier patent filed for an automated photography machine in America, in 1888, but it was apparently never built; other machines followed, but none was reliable.  Bernitt’s Bosco-Automat was the first commercially successful photo booth, and soon became popular at fairs and the like, both in Germany and beyond

Incredibly, these pictures also document Thomas Mann’s early fascination for having his picture taken.  Although born in the northern German city of Lübeck, from 1891 onwards, he lived in Munich.  The name ‘Paul’ can quite clearly be seen written in pencil on the paper cover on the right.  Mann’s full name was Paul Thomas Mann; he only dropped the ‘Paul’ when he became a published author a few years after the picture was taken, with his first novel, Buddenbrooks (1901).

The photo on the right shows Mann—then still quite chubby, but already with his trademark moustache—with his bride-to-be, Katia Pringsheim, taken during the couple’s romantic visit to Munich’s second exhibition of power engines and other machinery on 1 April 1898.  Undated, the other photo records another trip to the photo booth made by Mann, this time with his elder brother, Heinrich, with whom he was living at the time.

The idea of photography left its mark on Mann.  As Jane Marjorie Rabb has noted: initially, for the writer, ‘the photograph seems to embody the degeneration of art as well as the society that produced it …  But his later fascination with the spiritual and scientific revelations of the camera is evident both in his remarks on “phantom” photography in his study of the occult (1924) and in his use of “interior” photographs made by the X-ray machine in The Magic Mountain.  And around 1928 … Mann enthusiastically raised his opinion of photography’s aesthetic potential.  This change of mind may partly explain why he subsequently became a willing subject for the camera itself’ (The Short Story and Photography, p. 80).

2 responses to “On this day: Thomas Mann in a photo booth”