As regular readers here will know, I am always on the lookout for cross-cultural material.  So I was interested in reading two articles on Anglo-German cultural exchange published this week, in The Observer (on Neil MacGregor) and The New Statesman.  In the latter, mention is made of George Eliot and her connection with Germany.  As the article says, she visited a lot, spoke German well, and even commented, in 1879, that “Germans are excellent readers of my books”.  Eliot’s first published book had even been a translation from German: The Life of Jesus, critically examined (1846), a translation of David Friedrich Strauss’s Das Leben Jesu, kritisch bearbeitet (1835–6), PMM 300.

By complete chance, I was recently doing some work on translations of Eliot’s own books.  One would have thought that the first foreign language in which her work appeared might have been German, but no: it was Russian. 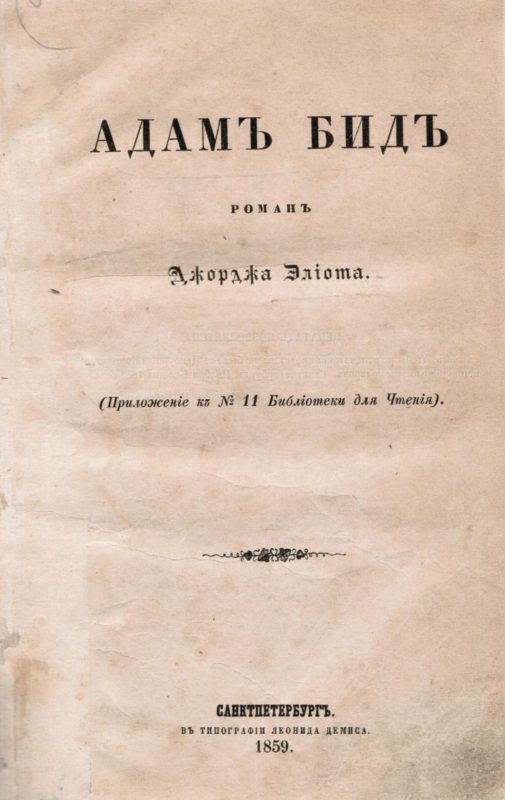 This is a copy of the first edition in Russian of Eliot’s first novel, Adam Bede, rivalled only by a Danish translation of the novel published in Copenhagen in two volumes, 1859–60.  The anonymous Russian translation appeared in three forms, all as supplements to literary journals: Russkii vestnik, Biblioteka dlia chteniia, and Otechestvennye zapiski.

Quite why the novel should have been picked up by a Russian translator, and so quickly, I have been unable to ascertain, but the book certainly proved popular.  ‘The first time that Eliot’s name was mentioned in Russia was in 1859 [the same year Adam Bede was published in London] in the literary journals which played so great a part in shaping Russian intellectual life.  This followed the publication of Adam Bede, the most widely read of her works in pre-revolutionary Russia.  For more than half a century the very name of Eliot was associated in common readers’ minds with this novel (titled as Adam Bid or as Detoubiitsa (Infanticide)), which was published in pre-1917 Russian translations eight times (in 1859, 1865, 1899, 1900 twice, 1902, 1903 and 1909) – more than any other novel by Eliot’ (Boris M. Proskurnin, ‘The reception of George Eliot in Russia: the start that determined the paradigm’, The Reception of George Eliot in Europe (Bloomsbury, 2016), p. 262).

Posted in
Previous: On this day: Thomas Mann in a photo booth Next: The first bibliography of 18th-century English literature