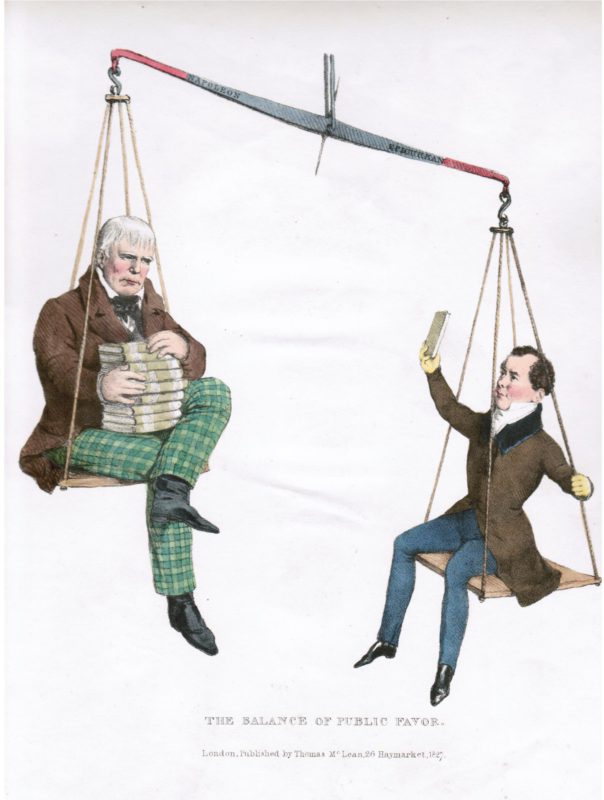 This large coloured lithograph, published in 1827, satirises Sir Walter Scott and how the Irish poet Thomas Moore pipped him to the post.  BM Satires explains:

‘A pair of scales hands unevenly.  In the upper scale sits Scott … supporting on his knees the nine volumes of his “Napoleon”.  He looks down, absorbed and melancholy …  In the other scale sits Thomas Moore, small, dapper, and jaunty … [and holding up] a small volume to Scott which outweighs his rival’s bulky compilation’.  Scott’s Life of Napoleon Buonaparte and Moore’s Epicurean, a prose tale based on the unpublished poem Alciphron, were to be published the same day.  ‘Moore said: “I found my little cock boat (the ‘Epicurean’) would be run down by the launch of the great warship (Napoleon)”.  He managed to get his book published the day before Scott’s (whose work he disparaged) …

‘Described by Lady Holland, “The likenesses are very strong & good; the joyous air of Moore is very well represented.”’

I plan to exhibit the lithograph later this month at the London International Antiquarian Book Fair.

Posted in
Previous: The first bibliography of 18th-century English literature Next: Off the rails: the first murder on a British train