At the London International Antiquarian Book Fair next week, I shall be featuring a number of books printed on coloured paper on my stand.  Here’s a sneak preview of one: 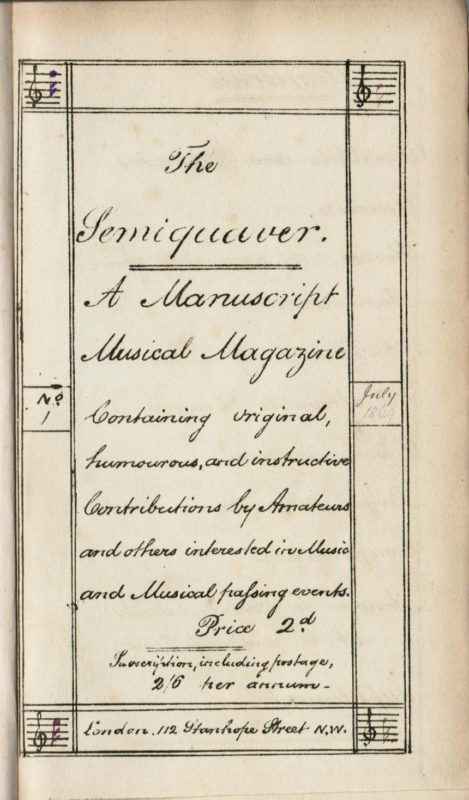 The Semiquaver was a charming privately-printed magazine, produced in 1869–70, in which each issue was lithographed on a different shade of vibrantly coloured paper. 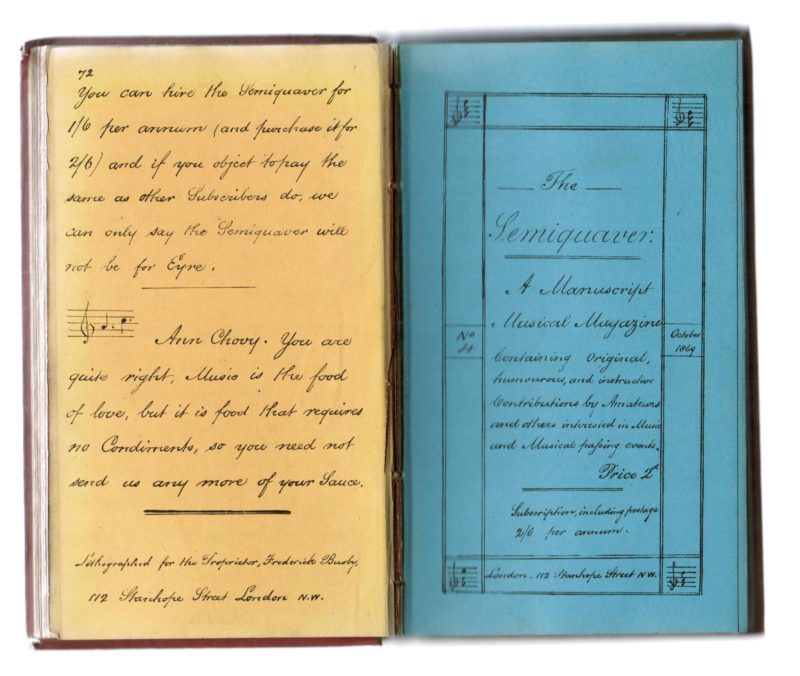 The writer/editor was a man called Frederick Busby, and his aim was to cover various aspects of musical interest—including concerts and events in London and provincial towns—in a humorous and informative manner.  It sets this tone in the ‘preludial piece’, which explains that the journal was almost called The Breve, but the present title was chosen ‘lest some of our readers say “if it is only a semiquaver, it must be soon over”’.  The work continues in this amusing vein, but with a sincere aim to bring a dash of élan—‘we shall appear on the first of each month in the most fashionable colours’—and genuinely interesting musical content ‘from a staff of amateur musicians and others interested in music’. 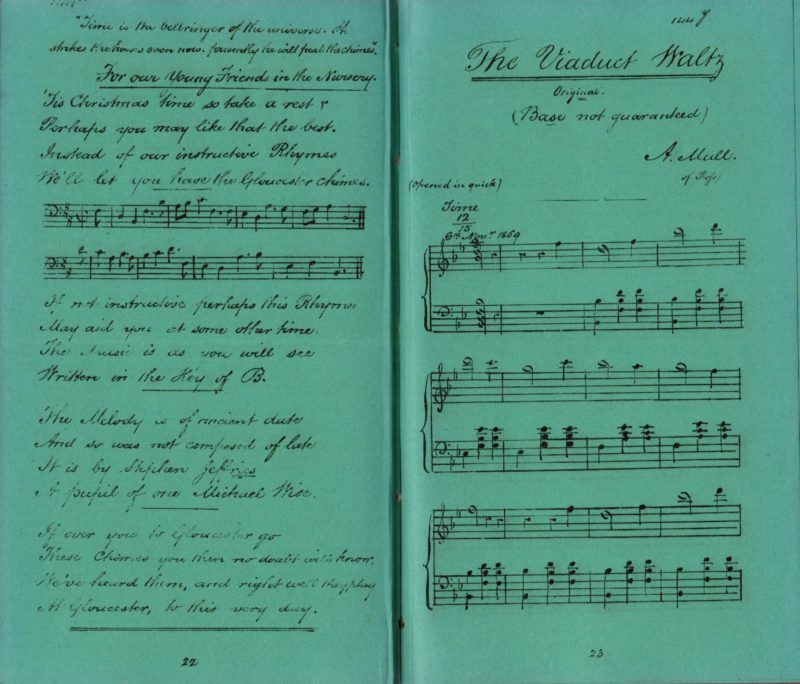 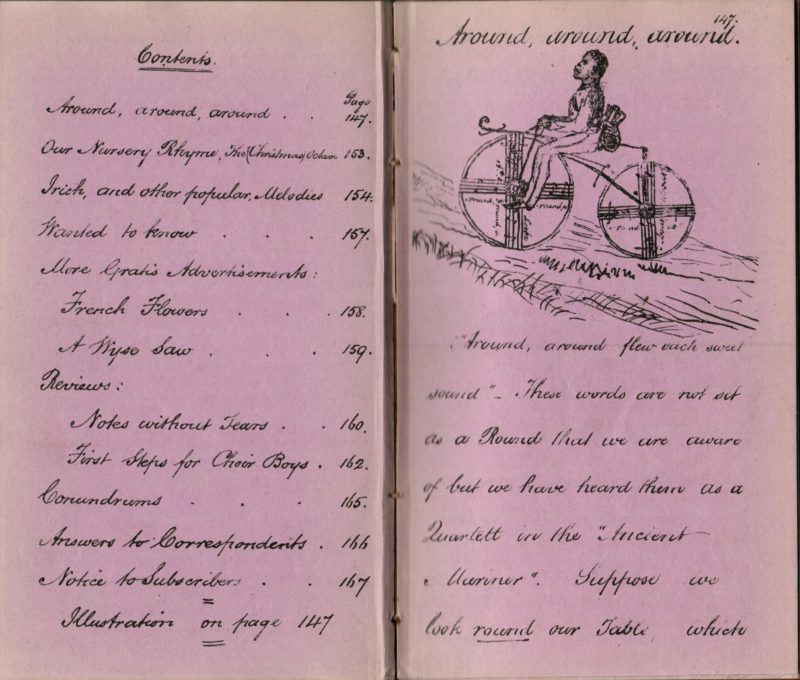 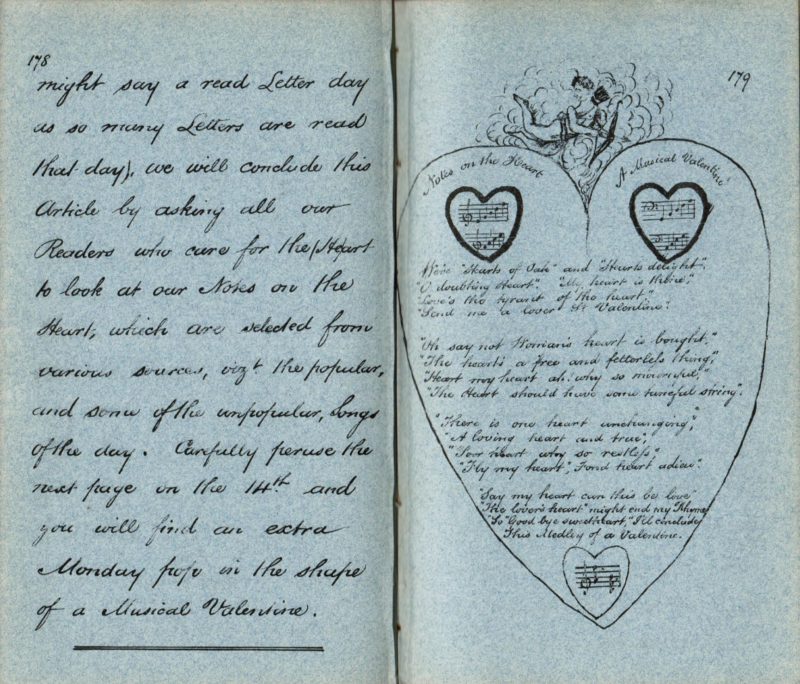 Each issue includes coverage of concerts lately held and forthcoming, educational segments regarding tricky or unusual musical notation, and a ‘Conundrum’: ‘When is a fiddler like a yankee?  When he draws the long bow’, though these become rather more laboured as the run progresses.

The magazine was distributed according to an annual subscription, but although new issues were listed in the literary notices of Lloyds’ Weekly Newspaper, its critical reception was rather scant.  A review in The Era for December 1869 fails to see the appeal in its unusual presentation: ‘The Semiquaver has not yet reached the dignity of type, but is simply lithographed’.  The reviewer is also rather snide about the November issue’s illustrations of Norwich and Worcester cathedrals, finding them ‘humorous’ in a way not intended by the artist: 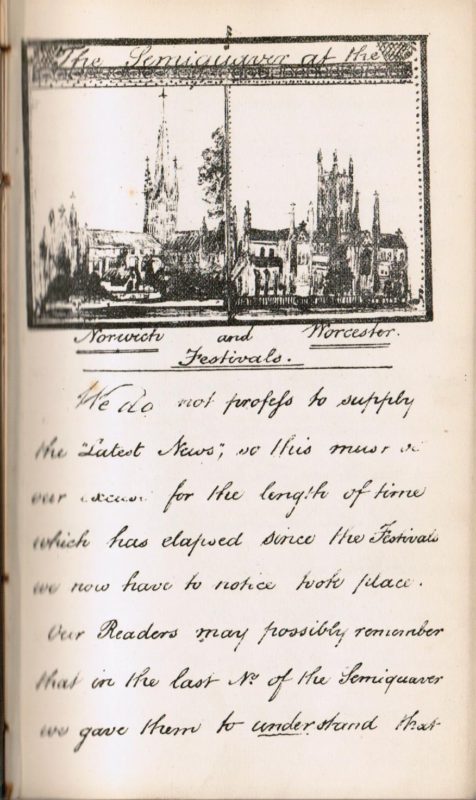 Despite this, various addresses to its readership give thanks for continued support, and many of the notices are responses to an actively corresponding readership.

Posted in
Previous: Off the rails: the first murder on a British train Next: More coloured paper