It’s been a few years since I blogged about Tchaikovsky, but as I sang a movement from the following piece last night, it seems apt to write something today. 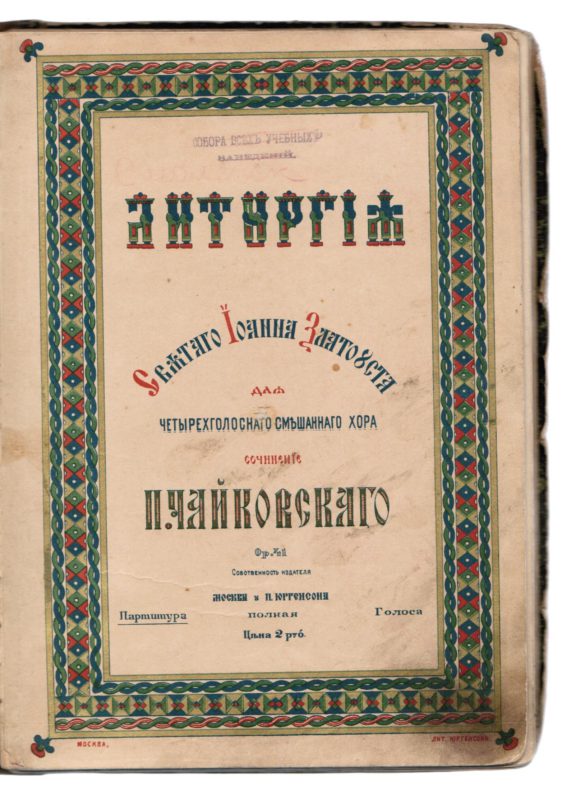 This is a copy of the first edition of Tchaikovsky’s Liturgy of St John Chrysostom which, like his first suite for orchestra, was written in 1879.  And, like his coronation cantata Moskva, it has an attractive chromolithographed title-page.

The first edition is rare.  ‘When the Liturgy appeared in print early in 1879 its appearance on sale in Moscow and St Petersburg caused protests from the offices of the Director of the Imperial Chapel Choir, Nikolay Bakhmetyev, who began legal proceedings against Jurgenson, accusing him of publishing the Liturgy without the approval of the director of the chapel, and of violating a number of government and synodal decrees.  Jurgenson had 143 of his plates of the Liturgy confiscated, and Bakhmetyev prosecuted him for allegedly breaking the law.

‘Although in June 1879 the Chief Administration for Printed Matter in Moscow authorized Jurgenson to publish the Liturgy, subject to the approval of the city’s church censor, Nikolay Bakhmetyev continued to protest.  Then Pyotr Jurgenson took legal action against Bakhmetyev.  Nevertheless, the continued circulation of the composition hindered Bakhmetyev and his supporters among the clergy.  The judgement of the Interior Minister was finally made in December 1879, and this was also in favour of Jurgenson.  Eventually the confiscated plates were released in November and December 1880 on the orders of the Synod, who enacted a decree allowing the Moscow church censor to approve the publication of church music without reference to the Director of the Imperial Chapel Choir’ (Tchaikovsky Research).