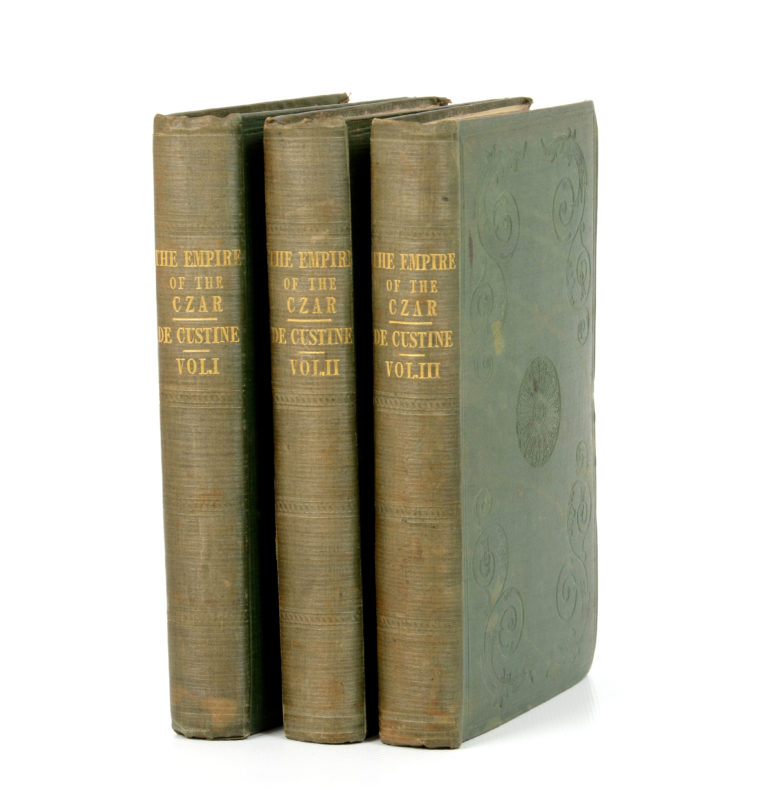 As it’s Banned Books Week (and as this year the focus is ‘Celebrating Diversity’), I thought I’d post this: The Empire of the Czar; or, Observations on the social, political, and religious State of Prospects of Russia, made during a Journey through that Empire, the first edition in English of La Russie en 1839 (Paris, 1843) by the Marquis de Custine (1790–1857).  Published the same year as the French original, it has been called ‘one of the most fascinating and most instructive volumes of Russian impressions by a foreigner’ (Simon Sebag Montefiore).

‘Custine’s 1839 trip to Russia was spurred by the triumph of Tocqueville’s De la démocratie en Amérique [1835–40], where democracy is represented as the ineluctable political evolution of advance societies.  Custine may have hoped that Russia was the proof that enlightened despotism was an equally viable system …  What Custine discovered, or believed he had discovered in Russia, turned out to be of a totally different nature from what he had expected to find: a country dominated by fear of a tyrannical power served by an implacable bureaucracy, in other words a police state.  Reluctant at first to publish his impressions, he did so after four years of discreet work.  The success of the book was considerable.  The 3000 copies of the first printing sold out.  Four pirate editions came out in Brussels before the second edition appeared in Paris.  The first English edition, entitled The Empire of the Czar, was issued in the same year, as was the first German edition; both were reprinted the following year.  In Russia, Custine’s book was banned at once …’ (Vincent Giroud, St Petersburg: a Portrait of a Great City (Beinecke Library, 2003), p. 108).

It may have been banned at the time, but Custine’s book is still in print over 170 years later.  When it was selected for inclusion in the Bibliothèque nationale’s 1990 exhibition En Français dans le texte (item 262), it was described as having ‘l’effet d’une bombe’.

Posted in
Previous: Greasepaint Next: Bor'ba in Boston