The last few weeks have been busy preparing for the California Book Fair.  America has been in the news recently, of course, and so I am interested to see what people make of one item I shall be exhibiting next week in Oakland: 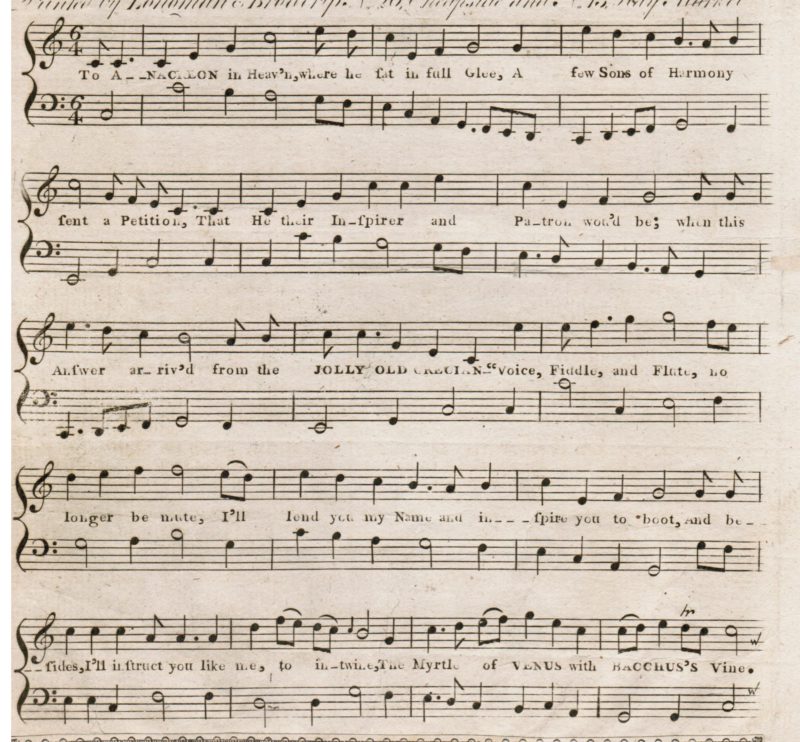 If it looks familiar, that’s because it’s the tune to The Star-Spangled Banner in its original form (both textually, rhythmically, and harmonically), published around 1780.  In fact, I have two printings of it: 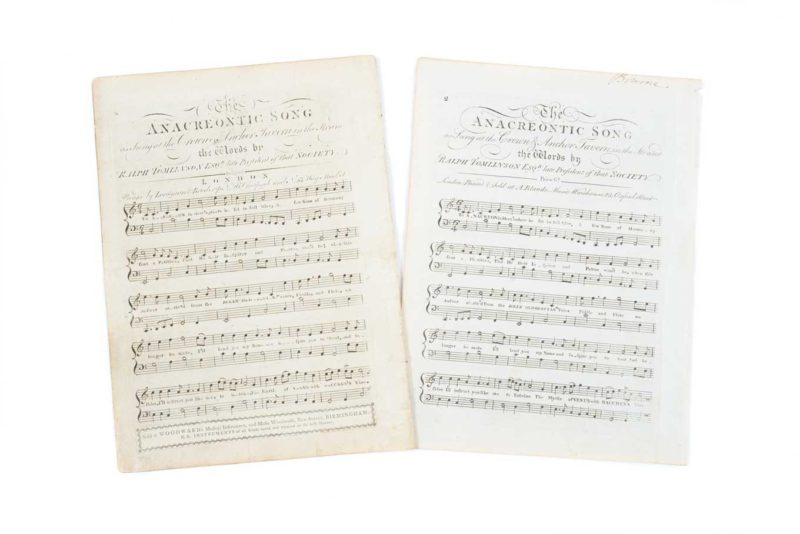 The song was written by John Stafford Smith for members of the Anacreontic Society, and first published by Longman & Broderip, c.1779.  The following year they reprinted the song (the one on the left here; the only difference between this and the first printing are the additional words ‘and No. 13 Hay Market’ in the publishers’ address).  The plates were used again c.1784 by the publisher Anne Bland (the printing on the right here), with a re-engraved title section.

‘The social cachet of the Catch Club, with its permanent waiting list for membership, and its success in reviving the catch and establishing the glee, inevitably inspired emulation …  One of the earliest and most significant London imitators was the Anacreontic Society, founded in 1766 …  It took its name from the Greek lyric poet Anacreon, famous for his celebration of love and wine …  The Anacreontic Song, ritually performed at all meetings of the society, had been specially composed by members of the society under the direction of John Stafford Smith to words by the lawyer Ralph Tomlinson, for a number of years president of the Anacreontics’ (Robins, Catch and Glee Culture in Eighteenth-Century England, pp. 72–3).  The song ‘soon became well known both in England and America, and its melody was also used as the setting for about 85 different printed American poems, almost all of a patriotic nature, from 1790 to 1820’ (Fuld, World-famous Music, p. 530).  The tune was first published with Francis Scott Key’s poem The Star Spangled Banner in Baltimore in 1814.  Eleven copies are recorded; the last in private hands sold at Christie’s in 2010 for over $500,000.

Posted in
Previous: A burlesque Tempest Next: The perils of emigration