Another month, another book fair.  In the past, New York book fair has taken place in April, but this year it’s moved to the beginning of March.  This has meant carefully selecting, even as far back as December last year, which items to take to California, and which items to take to New York.  The selection for Oakland worked well, and I was very pleased with how the fair went.  Hopefully, the visitors to the Park Avenue Armory in New York will be as interested in what I have chosen for them!  Here’s one intriguing item: 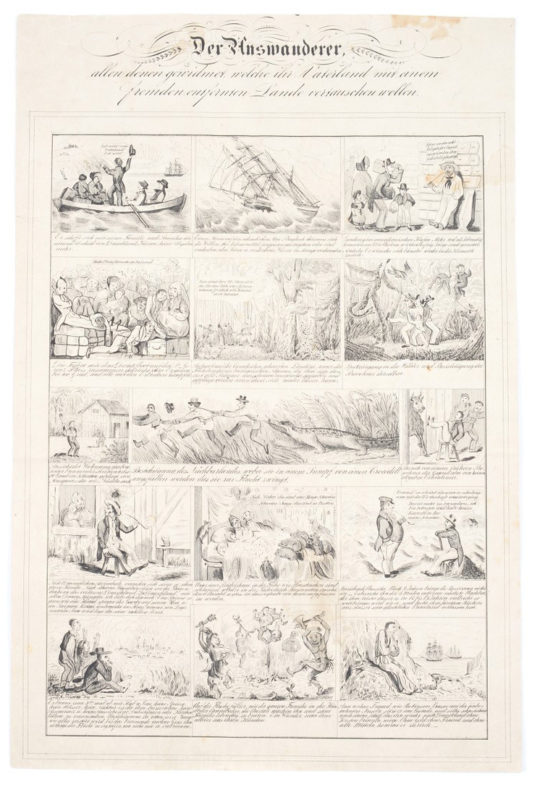 It’s a rare satirical print, ‘dedicated to all those who would exchange their homeland for a foreign, far-off country.’  The story which the print tells begins with the hero leaving Germany with his family; together they spend a month being tossed about on the waves of the Atlantic, with any provisions either beginning to run out or spoil, before they finally reach America, ‘more dead than alive’, only to find the place raging with cholera and coffins piled up at the docks.  They then travel by steamer up the St Lawrence River, pressed together cheek by jowl with their fellow passengers in the stifling heat, everyone battling the urge to throw up.  When they arrive at the Canadian border, they discover from the agent that the land they purchased is covered in trees, which need to be cleared before farming can begin.  At this point, the narrative, at least in terms of geography, becomes confused: they meet with snakes and monkeys in the forests; they must dig the land under the blazing sun (90° in the shade); they are plagued by mosquitoes that ‘sting like needles’, chased from a neighbouring swamp by a crocodile, and come across spiders the size of your hand.

Two years pass, and they have still to make a profit.  Their ‘neighbour’ (who lives five miles away) consoles them that they might be doing as well as him in about 12–14 years.  The final line of illustrations spells the end: all their worldly possessions burn down for the third time, forcing them to abandon their frontier life.  During their journey back, they are captured by cannibals, who try to boil him and his family alive.  By a miracle, our hero escapes.  In the final frame, we find him, poor and friendless, ‘like Robinson Crusoe’, looking longingly after a ship to take him back to Germany.

Judging from the print itself, I thought probably mid nineteenth century as a production date.  Then I discovered that six of the images, or versions of them, appear in a little book published in Leitmeritz (present-day Litoměřice in the Czech Republic) in 1850 called Das Goldland Californien.  There was a copy at Bonhams in 2015.  It’s impossible to know which came first, the book or the print, but one obviously served as the source for the other.

Posted in
Previous: O say, can you see...? Next: The first English translation of Russian verse, or a literary forgery?