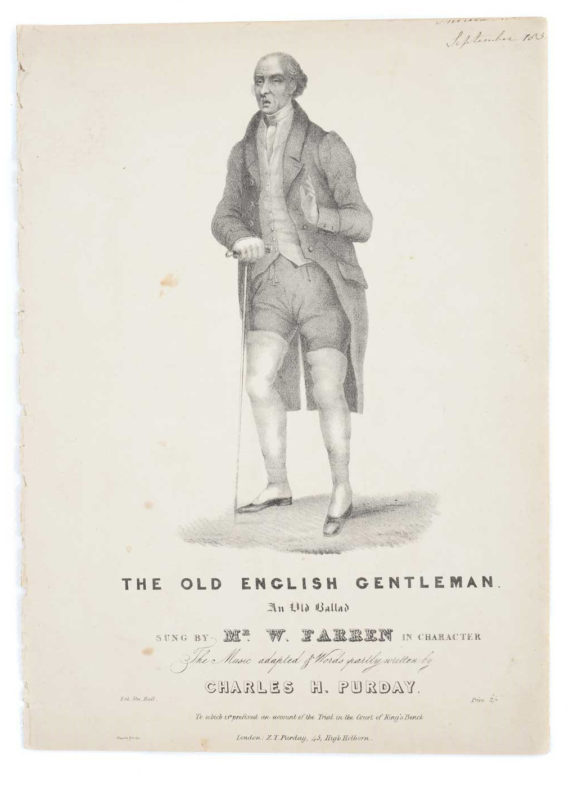 Here’s something else for the Edinburgh book fair: an interesting piece of music, published 1834/5, with local connections (and a fine lithographed title-page).

Charles H. Purday (1799–1885) was a composer, writer, and lecturer on music, the youngest son of the bookseller Thomas Purday (1765–1838).  ‘In his retirement he advocated reform of the copyright laws, seemingly because of injustices he had himself suffered, and in 1877 he published Copyright: a Sketch of its Rise and Progress’ (New Grove).  The reason for this interest in copyright laws stems from his song The Old English Gentleman, for which Purday had been taken to court twice in 1834—by Scott’s friend William Henry Murray, manager of the Edinburgh Theatre, and James Dewar, director of music at the Theatre Royal, Edinburgh—for allegedly pirating the song.  ‘In the year 1826 [Murray] published a song under a similar title, the idea and the words of which were taken principally from Percy’s Reliques of Old English Poetry.  In 1830, on occasion of the piece called Perfection being performed at Edinburgh, [Murray] made an addition of three verses to the former song, and sung it at the Edinburgh Theatre in its altered and amended state.  He handed it over with the additional words to Mr Dewar … and [he] handed the song to Mr Robertson, a publisher, to be engraved and published.  The song was accordingly published, and after a second edition had come out in Edinburgh, it was published by Mr Cramer … in London.  Between the last two editions, [Purday] published a song so very similar in title and words as to leave no doubt that it would be taken for the original song …’ (The Times, 13 June 1834, p. 6).  The defence showed that the song existed in various other forms, and that Purday had not taken it from Murray’s version, and he was acquitted.

The following week, Purday was once again in the dock, for plagiarising the music, during which Dewar’s lawyer called a number of well-known musicians to take the stand, including Sir George Smart, Henry Bishop, Thomas Attwood, and Ignaz Moscheles.  ‘Much laughter was excited during the trial by the attempts on the part of the counsel and witnesses to give the jury distinct ideas of the differences between the melodies of the three airs … being restrained from explaining either by vocal or instrumental performance’ (The Times, 18 June, p. 4).  A nonsuit was entered, as the jury found there was not enough evidence of Dewar’s copyright.