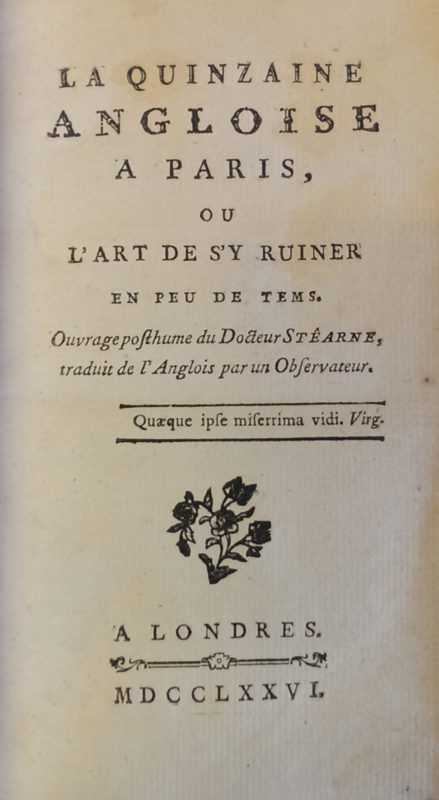 This is a book I’ve only had once before, and I was pleased to find it again.  It’s the first edition of a novel which appeared the following year in English translation, in both London and Dublin, as The Englishman’s Fortnight in Paris; or, the Art of ruining himself there in a few Days.  The ‘Londres’ imprint here is fictitious: the book was actually published in Paris.

Another untruth about the title is that it is not a posthumous work by Laurence Sterne, but an original novel by the quarrelsome young Jacobite Sir James Rutlidge (also Jean-Jacques Rutledge, 1742–1794).  Born in Dunkirk, of French–Irish descent, and brought up bilingual in English and French, ‘Rutlidge’s principal claim to fame was his promotion of English literature in France.  In Observations à messieurs de l’Académie française (1776) he provided a spirited defence of Shakespeare’s superiority over French dramatists, attacking Voltaire for his earlier criticisms of the English writer’ (Oxford DNB).  Such criticism also appears here, with a 12-page preface devoted to the defence of Shakespeare against the claims of Voltaire, and incidental reflections on the comparative merits of French and English literature scattered throughout.

The novel itself tells the story of the rapid demise of a young English aristocrat during a visit to Paris.  Seduced by the glittering beau monde, he attends balls, the races, galleries and the theatre, and (naturally) falls in love but, in a series of unfortunate events, loses all his money and finds himself imprisoned for debt.  The novel’s critique of French society made it notorious in its day, especially since Rutlidge neglected to disguise several of its characters, notably the painter Jean-Baptiste Greuze whose atelier the hero visits, occasioning a discussion on the decadence of contemporary French art.  Despite its obvious caricatures, it is a serious comparison of English and French character and must be worthy of a modern reprint.

Posted in
Previous: Cross-dressing circus performer turned novelist Next: Many a slip