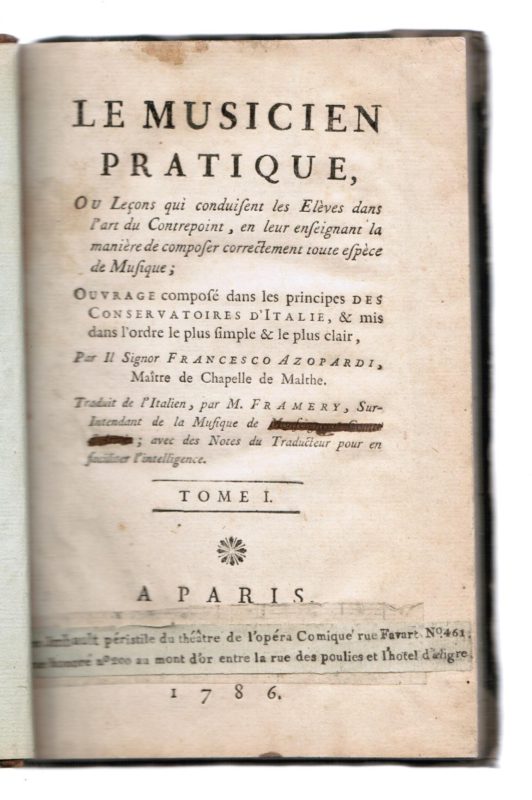 This is a copy of the first appearance in print of Il musico prattico, by the Maltese composer and theorist Francesco Az[z]opardi (1748–1809).  It was later ‘introduced as a textbook in Paris by Grétry: Cherubini based the 19th chapter of his treatise Cours de contrepoint (1835) on its analysis of imitation’ (New Grove).  The translator is Nicolas-Etienne Framery (1745–1810), a successful librettist, critic, and erstwhile editor of the Journal de musique and, later, the musical section of the Encyclopédie méthodique.  The title-page here styles him ‘Sur-Intendant de la Musique de Monseigneur Comte d’Artois’, but the name—‘comte d’Artois’ was the title used by Louis XVI’s youngest brother, Charles—has been crossed out in manuscript ink.

Something else that has happened to the title-page is the use of a printed paper slip to change the imprint.  This is a practice one sees every so often with eighteenth-century books, but this example was a first for me: the imprint has been altered twice.

The original imprints reads ‘A Paris Chez Le Duc’, which was first changed to ‘Chez Louis’, then ‘Chez [Jean-Jérôme] Imbault’, a well-known violinist whose music publishing business grew in stature in the 1790s and early nineteenth century.

Posted in
Previous: Self-ruin and Shakespeare, a novel Next: The Foundling Hospital Collection