Something else I shall have on my stand at the London International Antiquarian Book Fair next week is this, a curious Russian lithograph from the 1850s: 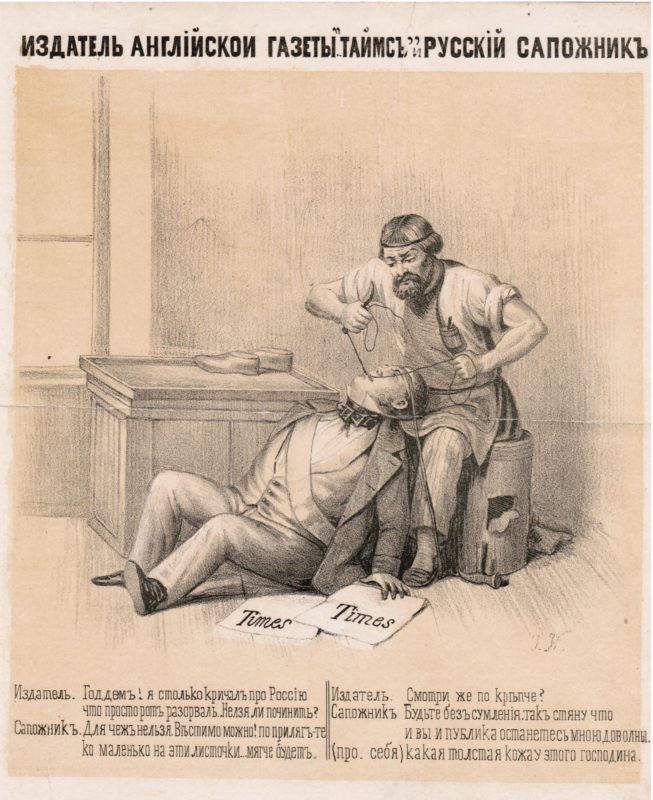 It’s entitled ‘The editor of the English newspaper “The Times” and the Russian bootmaker’, and highlights The Times’ position during the Crimean War.  In the image, the editor complains to the bootmaker that he has torn his mouth through shouting on behalf of Russia, which the bootmaker has set about to repair, remarking (to himself) ‘what thick skin this man has’.

John Thadeus Delane (1817–1879) was editor of The Times for thirty-six years, 1841–77.  ‘Under Delane’s editorship The Times was loosely identified with Liberalism … [and] the power of The Times in opposition to government was seen very clearly during the Crimean War, when Delane felt it was his duty to condemn those directing the war …  In his lifetime Delane was widely regarded as the unquestioned head of the journalistic profession, who had done much to raise the tone of journalism.  Some of his innovative methods of reporting news, which included the use of interviews, and his Crimean and other “crusades”, foreshadowed the “new journalism” of the later nineteenth century’ (Oxford DNB).

Posted in
Previous: French journals, personified Next: ‘A refined image of disability’