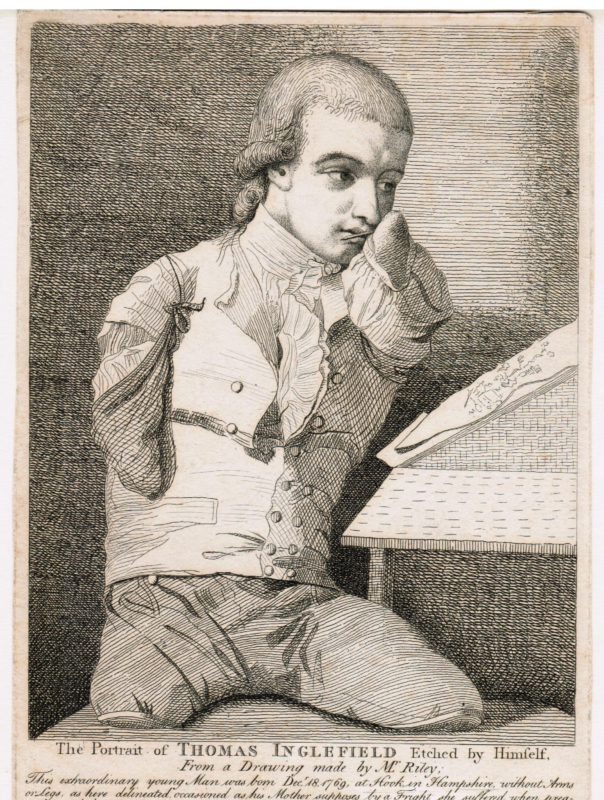 The full caption reads: ‘ ‘This extraordinary young Man was born Dec.r 18. 1769, at Hook, in Hampshire, without Arms or Legs, as here delineated, occasioned as his Mother supposes by a Fright she suffered when pregnant with him.  Notwithstanding these Disadvantages he has by industry acquired the Arts of Writing & Drawing, holding his Pencil between the Stump of his Left Arm and his Cheek & guiding it with the Muscles of his Mouth.  In order to assist these extraordinary Efforts of Ingenuity, this Drawing was presented to him by Mr. Robertson, & Mr. Fittler kindly super-intended the Etching.  This Print is Sold by T. Inglefield at No. 8, Chapel Street, Tottenham Court Road, where Ladies & Gentlemen may see him & many more of his Performances.’ 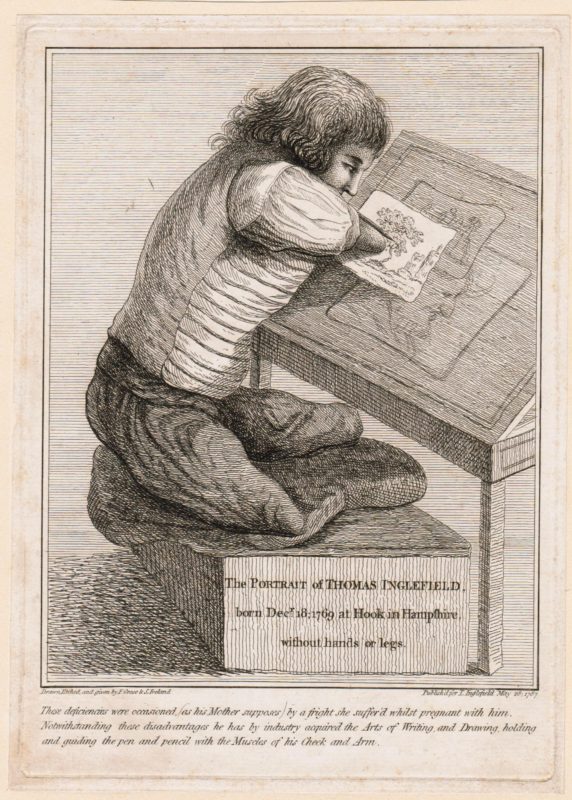 It seems only two portraits of the artist and etcher Thomas Inglefield were produced in the eighteenth century, both in 1787.  Both ‘display him working.  In the portrait by Samuel Ireland, Inglefield sits at his drawing board, drawing a pastoral scene, in an image that is intended primarily to demonstrate his ingenious way of holding and guiding his pencil using his cheek and arm.  The picture of a tree that he is engraving is also perhaps chosen to align Inglefield with the natural world to show that in spite of his unusual appearance he is part of natural creation.  The image, in which Inglefield’s face is partly obscured, therefore portrays him as an object of wonder, with much emphasis on his unusual physical characteristics.  The Portrait of Thomas Inglefield Etched by Himself, however, while also showing his manner of working, places much more emphasis on the subject’s humanity.  Inglefield’s handsome face and thoughtful expression compel the viewer to engage with his humanity.  Inglefield is portrayed as well-dressed, his “deformed” legs concealed by his trousers, and the stump not used for drawing discretely hidden in a sling.  The portrait presents a refined image of disability which focuses on the industry and sensibility of its subject.  It is an image that registers physical difference, but conceals its more “shocking” elements, protecting viewers from discomfort.  Although etched by Inglefield himself … the image, while emphasising Inglefield’s extraordinary abilities, is placed in the context of late eighteenth-century sensibility and humanitarianism, emphasising the kindness and assistance of the engraver’s benefactors’ (David M. Turner, Disability in Eighteenth-century England: Imagining Physical Impairment, p. 99).

Posted in
Previous: A thick-skinned English journalist Next: ‘Somewhat removed from the text of Shakespeare’

2 responses to “‘A refined image of disability’”