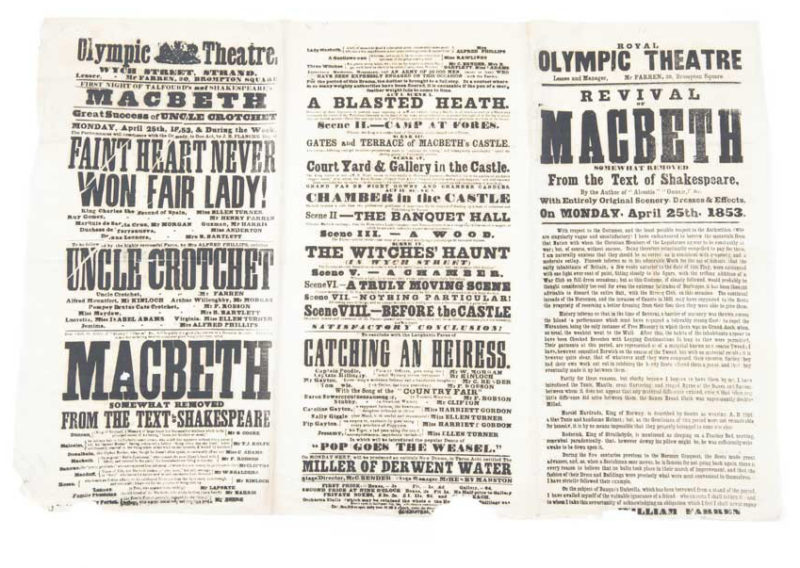 This was fun to catalogue.  Not only because it’s a triple bill (500 × 735 mm), but because it promotes an extravaganza at London’s Olympic Theatre in April 1853, the highlight of which was a Macbeth burlesque by Francis Talfourd (1828–1862).

Multi-production theatricals became increasingly popular throughout the nineteenth century, and this programme of entertainments follows a familiar lively format.  The evening opened with a one-act comedy entitled Faint Heart never won fair Lady! by jobbing playwright and herald James Robinson Planché (1796–1880), whose work was known for ‘running the entire gamut of dramaturgic taxonomy from burletta and masque to high drama and grand opera’ (Oxford DNB).  This was followed by Uncle Crotchet by Mrs Alfred Phillips, who appeared as Lady Macbeth in the following production, and two final one-act vignettes.

The highlight of the evening, Talfourd’s Macbeth ‘somewhat removed from the Text of Shakespeare’, was originally performed as Macbeth Travestie at the Henley Regatta in June 1847, and afterwards opened at the Strand Theatre in January 1848.  The present playbill advertises its second London production, and provides an amusing scene-by-scene synopsis, along with an irreverent list of dramatis personae.  The final section features an arch-comic piece offering spurious justification for what was evidently an eccentric array of costume: ‘I have introduced the tunic, mantle, cross gartering and ringed byrne of the Danes and Saxons, between whom it does not appear that any material difference existed …  Harold Hardrada, King of Norway, is described by Snorre as wearing A.D. 1066 a blue tunic and handsome helmet; but, as gentlemen of this period were not remarkable for honesty, it is by no means impossible that they properly belonged to someone else.  Roderick, King of Strathclyde, is mentioned as sleeping on a feather bed, proving, somewhat paradoxically, that, however downy the pillow might be, he was sufficiently wide awake to be down upon it.’

An alumnus of Eton and Christ Church, Oxford (where he co-founded the Oxford Dramatic Amateurs), Talfourd was notionally engaged in practising law, but was known chiefly as the writer of classical and Shakespearean burlesques such as the one advertised here.  His obituary in The Athenaeum noted that ‘Talfourd … has left the world with little or no adequate witness of his powers—the travestie and burlesque in which he revelled showing but one, and that the poorer, side of his gay and brilliant intellect.’

Posted in
Previous: ‘A refined image of disability’ Next: The first dog drama