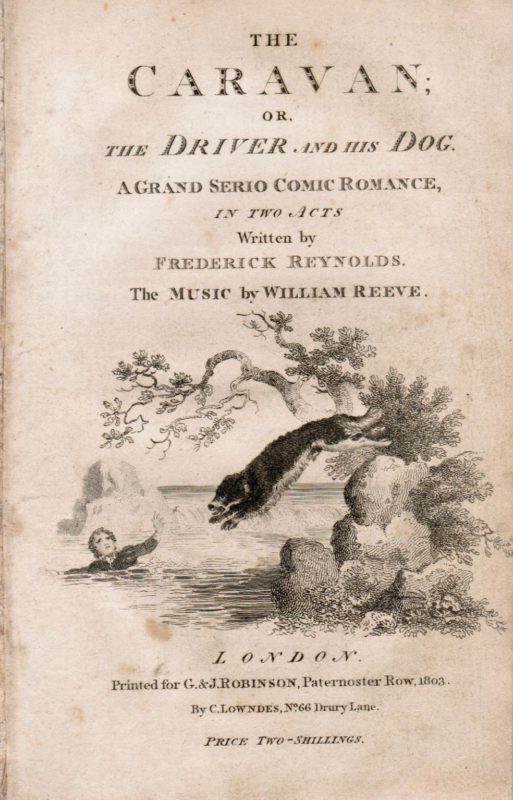 This is a copy of the first edition of a hugely-successful play, published 1803, thought to be the first ‘dog drama’, which began a vogue for the use of trained animals on the London stage.

Playwright Frederic Reynolds (1764–1841) wrote this afterpiece set in bandit-ridden Spain for Drury Lane, where it was first performed on 5 December 1803.  It was a spectacular success, thanks mainly to the novelty of Carlos the dog who dived from a rock into a tank of water to save a drowning child.  He is thought to have saved the Theatre, too, from financial disaster, and ‘Reynolds enjoyed retailing the story that [theatre manager, Richard Brinsley] Sheridan regarded the dog—not himself—as “guardian angel” and “preserver of Drury Lane”’ (Oxford DNB).

With its chorus of pirates and soldiers, the work is typical of the kind of melodrama which Reynolds made his own.  Although now largely forgotten, he was of sufficiently high profile to have been the subject of two lines of Byronic satire in English Bards and Scotch Reviewers (1808).

The title-page vignette shows the drowning boy Julio at his moment of salvation, played in the production by a young William West (1797/8–1888), later known as the ‘Father of the Stage’.

Posted in
Previous: ‘Somewhat removed from the text of Shakespeare’ Next: On the Road in Russia