I’m currently cataloguing towards the Boston book fair, and am enjoying working through things acquired over the summer.  Here’s one: 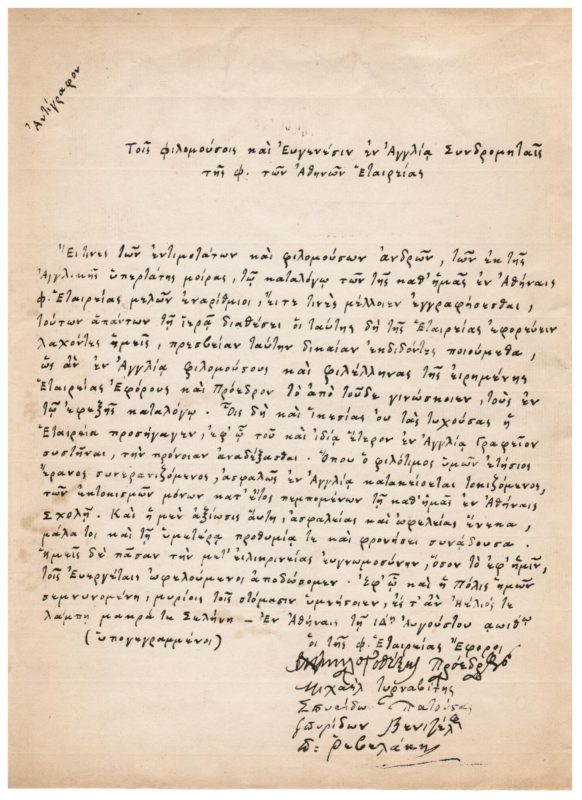 It’s a lithographed facsimile of a letter in Greek, signed by the President and four members of the Philomuse Society of Athens, 14 August 1819.  It was probably printed at the instigation of the Earl of Guildford, the leading philhellene of his day, and first president of the Philomuse Society, founded in Athens in 1813–4 and dedicated to the education of Greek youth, to be sent to existing and/or new subscribers.  It informs English members of the society that a separate branch is to be set up in London, where the capital from money raised will remain, with the interest being sent annually to Greece.  The second page contains the names of the English committee, under the chairmanship of the Earl of Guildford, which includes such names as Hobhouse, Leake, Haygarth, F. N. Douglas, Aberdeen, Gell, Walpole, Holland, etc.

I usually only deal in things I can read, and Greek isn’t one of my languages, but this letter is quite early for English lithography, which is an interest of mine.

Posted in
Previous: Rimsky-Korsakov's Harmony Manual Next: British support for the French Revolution