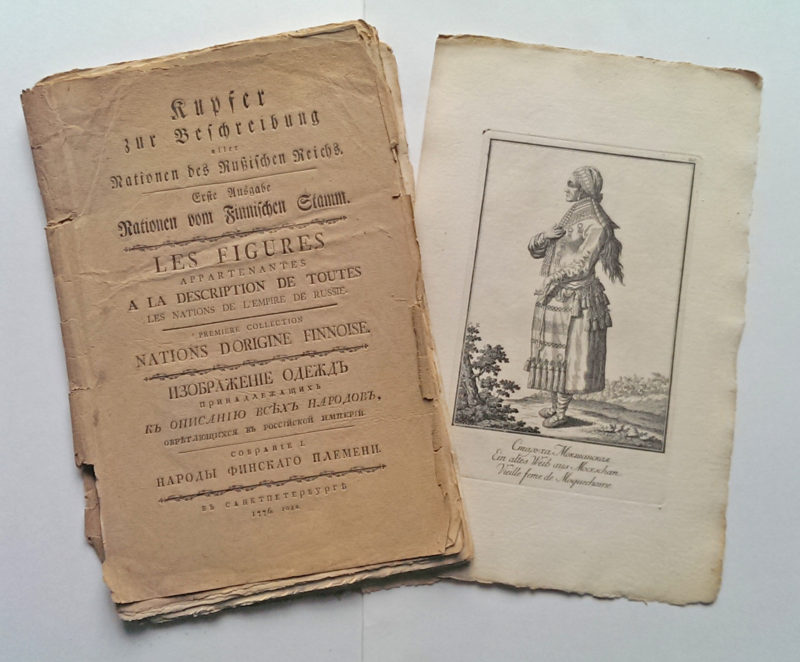 A fascinating survival: the plates for the first volume of Georgi’s Beschreibung aller Nationen des Russischen Reichs (4 vols, 1776–80), ‘the first demographic study of the peoples of Russia’ (Howgego I-G36), still loose and yet to be coloured, in the printed sheet they were wrapped in as they left the printshop.  Translations of Georgi’s book, into French and Russian (of the first three volumes only), were issued concurrently, but the same plates, executed by Christoph Melchior Roth (1720–1798), were used in all three versions.

In the first chapter of his recent work Nineteenth-Century Dust-jackets (2016), Mark Godburn, charting the origins of publishers’ jackets, notes that before the nineteenth century there was ‘a more formal practice of loosely wrapping unbound sheets, not in printers’ scrap, but in paper that was specifically printed for the job.  How common this practice was cannot be determined because only two examples are known to survive.  One was printed in Germany for a set of sheets of Daniel Chodowiecki’s Clarissens Schicksale (1796) …  The other example was issued in the United States around the same time [Philadelphia, 1791]’ (pp. 25–7).

What we have here is evidence for a similar practice in an eighteenth-century Petersburg printshop, and was never intended to be seen by the public in this form.  The setting of the front cover is exactly the same as the divisional title-page to the plates section in the final book as published.  We surmise that the folded sheet used here to protect the plates—the trilingual title as mentioned in the Svodnyi katalog of foreign-language books printed in Russia before 1800 (1068n), with a trilingual list of the plates on the conjugate—was intended to be cut in half and bound, together with the plates it protects, into a copy of the book.  The only thing which still puzzles us is that the book itself is a quarto, but the paper used for the wrapper here is small folio; the chain lines in the paper are vertical.  A visit to the British Library advanced us no further in our hypothesis: its copy lacks the entire plates section.

Posted in
Previous: An early publisher's printed endpaper? Next: Birthday tunes for a new King

2 responses to “An 18th-century dust-wrapper”