We are currently cataloguing recently-acquired material for a new list, “English Music”.  One book which will feature is this, some birthday minuets for George III.  In fact, it is the first such annual collection published during his reign, apparently known in only one other copy, at the British Library. 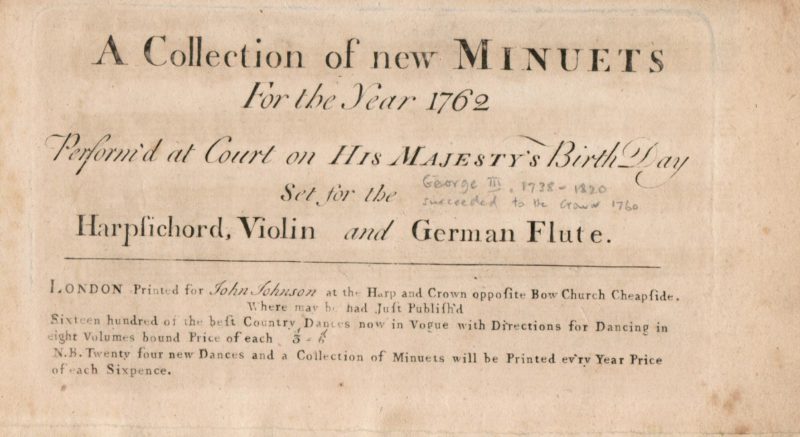 The practice appears to have been begun for George II—the earliest Collection dates from 1722 when he was still Prince of Wales—by the royal music publisher John Walsh, whose eponymous son carried on producing an annual collection of minuets as a birthday present for the King, and George III after he had succeeded his father, until 1765, the year before Walsh died.  The Walshes also brought out half a dozen collections of minuets for Queen Caroline’s birthday, and another for Princess Mary, on her marriage to Frederick of Hesse-Kassel in 1740. 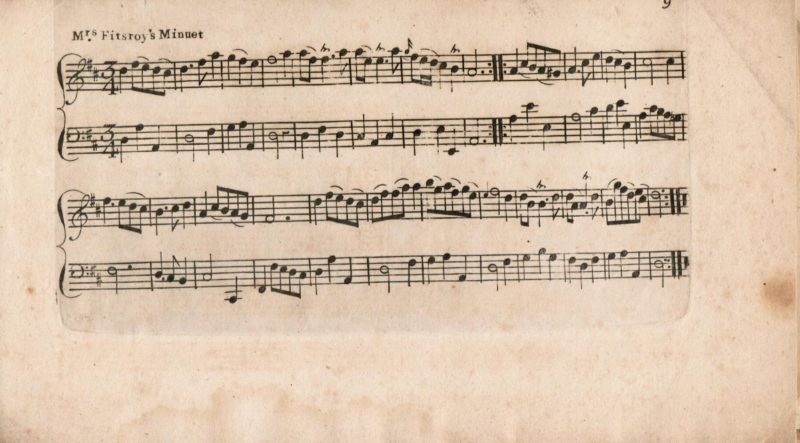 In the 1750s other publishers, such as John Johnson, and Charles and Samuel Thompson, began to issue rival birthday collections of minuets, ‘one of the most popular social dances in aristocratic society from the mid-17th century to the late 18th’ (New Grove).  We have been unable to ascertain whether the tunes included in the present numbers copy those published by Walsh, or whether they are new here.  In their Bibliography of the Musical Works published by the Firm of John Walsh during the years 1721–1766 (Bibliographical Society, 1968), Smith & Humphries list a Walsh collection for 1762 , but locate no copies, and we have been unable to locate one in any of the standard printed bibliographies or online databases.

Posted in
Previous: An 18th-century dust-wrapper Next: An unrecorded song, from an unrecorded publisher