I have long been interested in dictionaries, even before I completed my MA in Lexicography twenty years ago.  One book we shall be exhibiting at the London Rare Book Fair next week is this: 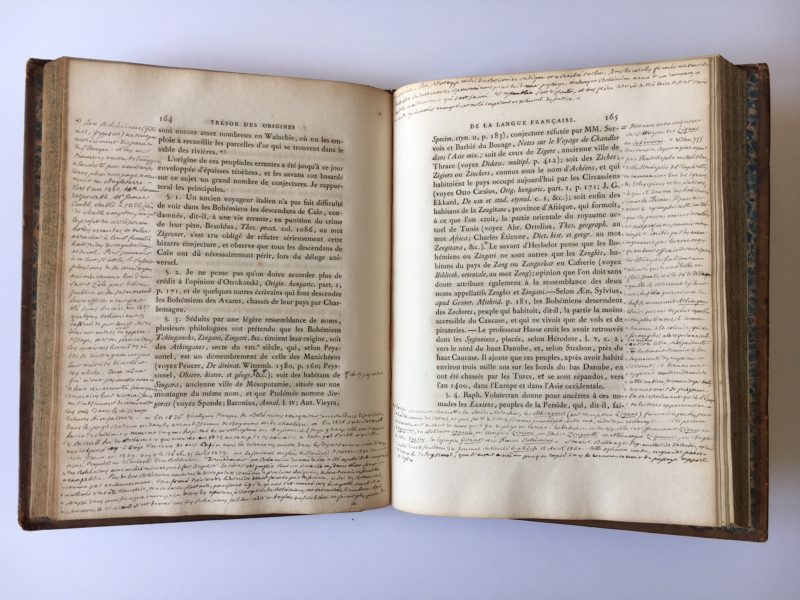 It’s a copy of the first edition of Trésor des origines et dictionnaire grammatical raisonné de la langue française (1819).  Although over 400 pages long, it is ‘only a specimen of a projected work’ (Oxford Companion to French Literature), an immense dictionary compiled by the blind French bookseller Charles de Pougens (1755–1833) which was never published in full.

Pougens, who was allegedly the illegitimate son of the Prince de Conti, suffered an early setback when he was blinded by smallpox during his studies in Rome.  Undeterred, he found work first as translator, then as a bookseller.  During his career he prepared the portable library for Napoleon’s Egyptian campaign, ran a printing company with some fifty staff, and created a literary journal.  Another blind polymath, Alexander Rodenbach (1786–1869), described him as ‘one of the most distinguished blind men of the century’.

Pougens’ fame now rests largely on the extraordinary lexicographical project which consumed much of his life: a vast dictionary for which he gathered over 500,000 quotations from French literature.  He and his English wife eventually retired to northern France to finish the project, but he died of apoplexy before its completion.  The 100 folio volumes of notes for his dictionary, which were much used by Littré for his great Dictionnaire de la langue française (1863–73, ‘still the finest work of its kind for the study of the changing use and meaning of words’, Oxford Companion), are held by the Institut de France.  Most of those volumes are in the hand of Théodore Jorin, Pougens’ amanuesis, to whom the present copy of the only printed part of the dictionary was given by Pougens and whose neat marginal annotations here expand on the text, offer new interpretations, and make reference to contemporary lexicographical scholarship.  Pougens’ inscription (‘mon premier ami’) hints at the close working relationship between the men, and the volume offers a wonderful insight into their hugely ambitious project.

Posted in
Previous: The Death Song of the Cherokee Indian Next: Mixed formats